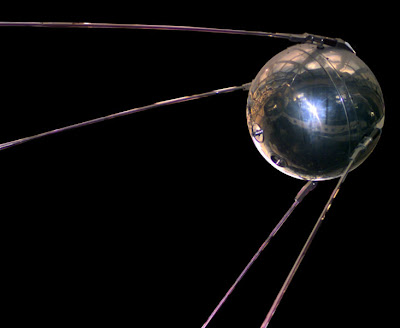 I was five years old, but I remember standing out in our front yard and looking up at the sky, wondering if I could see it. It was far too small to be seen with naked eye, but the local radio station played back the signal that it broadcast — a plaintive beep-beep — as it orbited.

The grownups were freaked out, but us kids thought it was cool, and when the Space Race was in full swing we got to watch the launches of the Mercury spacecrafts on black-and-white TV’s wheeled into the gym at my grade school.

Looking back, it’s absolutely amazing that we went from a basketball launched into orbit to Neil Armstrong standing in the Sea of Tranquility in less that twelve years. Yes, it was spurred on by the Cold War, but we put that fear of the Russians and their advances into space into the energy that was based on the American instinct to win into real achievement instead of lapsing into fear and fingerpointing.