Not happy with the current crop of GOP candidates? Looking for someone who really can deliver the goods on Election Day? There’s only one person out there who can really do it…and look fabulous in the process. 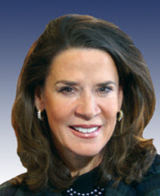 It’s just been so hard to keep track of where the current Republican candidates stand on the issues that truly matter, like hating immigrants, ensuring campaign contributors get exorbitant government handouts, privatizing Social Security, and reducing the number of children with health insurance.

Even the bedrock social positions we’ve come to expect have gotten lost in a maze. One GOP candidate is pro-choice now; another was pro-choice in 2002 and pro-life now; and yet another even lobbied for a pro-choice group, though he says he is pro-life now.

The Republican candidates have even dabbled in the myth of global warming and the insanity of getting out of Iraq.

What’s so hard about keeping the Republican tradition of lining your pockets while keeping others down?

Real Republicans like us are afraid that the party has lost its way.

Rudy, Fred, John, Mitt, Mike and the rest just don’t seem to get it.

We need a change to keep things the same.

Check out the disclaimer at the bottom of the home page. Who says Democrats don’t have a sense of humor?