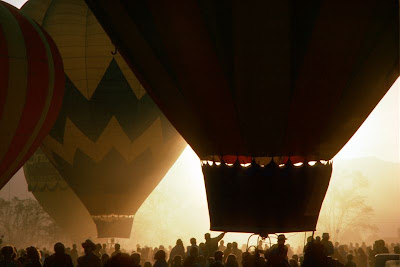 When I lived in Albuquerque, my house was a couple of miles south and east of Balloon Fiesta Park and I remember watching the sky fill with the balloons of all shapes and colors, including the Cutty Sark clipper ship, a giant electrical plug, and even an inflated Jesus Christ at the Special Shapes Rodeo. The coolest sight was being out before dawn when the winds were calm and seeing the glow of the balloons as they rose up in the Dawn Patrol. At night we’d sit up on the flat roof of the house in lawn chairs and watch the Afterglow — where the balloons would all light up their burners but not launch — and watch the fireworks. It’s one of things I miss about living in Albuquerque…aside from the chile, the mountains, and my friends.

The balloon fiesta has become such a part of the New Mexico culture that it’s featured on one version the state’s license plate.

HT to David Nicholson for the license plate picture.