– The Families on Veterans Day: From The Toledo Blade: How the families cope with the loss of a loved one who died in combat.

Kathy Miller grew uneasy as she watched the beam of light move along the road from house to house and creep toward her own.

It was another hour or two before sunrise on the morning of Nov. 11, 2004 — Veterans Day — and Mrs. Miller was sitting outside smoking a cigarette while her husband, Dennis Miller, Sr., was inside dressing for work.

As the light moved closer, she saw that it was attached to a police car and how someone inside was flashing a spotlight on the address numbers of each passing house on her street. By the time the vehicle stopped, her heart was already racing.

“When they stopped the car and shined the light out front, I knew what they were going to tell me,” said Mrs. Miller, whose only son, U.S. Army Pfc. Dennis J. Miller, Jr., 21, was stationed in Iraq.

The car door swung open and out came a woman from the Army with news that her son, “Little Denny,” had been killed the day before when his tank was ambushed by insurgents near Ramadi.

“It was just like what you see on TV; it really was,” Mrs. Miller said.

Today marks the fifth consecutive year that Veterans Day, a federal holiday, has occurred while U.S. troops are fighting wars in Iraq and Afghanistan.

About 167,000 U.S. troops are stationed in Iraq, and approximately 26,000 are in and around Afghanistan. There have been 454 U.S. service deaths in Afghanistan and 3,849 in Iraq. The fatalities in both conflicts have included 23 servicemen from northwest Ohio and southeast Michigan.

Veterans Day is historically an occasion to honor the service and sacrifice of all veterans. It is the successor to Armistice Day, which arose in the aftermath of World War I as a tribute to the U.S. servicemen who fought the “war to end all wars.”

Nearly 10 million soldiers, more than 116,500 of them American, lost their lives in the First World War before the signing of the armistice at the 11th hour of the 11th day of the 11th month in 1918.

Less blood has been shed in the Iraq and Afghanistan campaigns than in past U.S. wars. Yet for the families of the men and women who have given their lives, the loss and pain has been no less significant.

As the nation formally pays respects to its war veterans, the memories of its youngest fallen soldiers are being honored at all hours, of every day, and of every month.

Private Miller, who hoped to become a history teacher after returning from Iraq, now rests in a cemetery about a mile away from his parent’s home. He’s buried beside his grandfather, William Miller, Sr., who served in the Army during World War II and died at age 83 just two months before his grandson.

The stones of both war veterans have been surrounded with flowers and honorary markers ever since. During winter months, the Millers adorn the graves with matching red, white, and blue floral-wreath grave blankets.

– Frank Rich: How we’ve lost the freedoms we told the world we were fighting for. In the six years of compromising our principles since 9/11, our democracy has so steadily been defined down that it now can resemble the supposedly aspiring democracies we’ve propped up in places like Islamabad. Time has taken its toll. We’ve become inured to democracy-lite. That’s why a Mukasey can be elevated to power with bipartisan support and we barely shrug.

This is a signal difference from the Vietnam era, and not necessarily for the better. During that unpopular war, disaffected Americans took to the streets and sometimes broke laws in an angry assault on American governmental institutions. The Bush years have brought an even more effective assault on those institutions from within. While the public has not erupted in riots, the executive branch has subverted the rule of law in often secretive increments. The results amount to a quiet coup, ultimately more insidious than a blatant putsch like General Musharraf’s.

More Machiavellian still, Mr. Bush has constantly told the world he’s championing democracy even as he strangles it. Mr. Bush repeated the word “freedom” 27 times in roughly 20 minutes at his 2005 inauguration, and even presided over a “Celebration of Freedom” concert on the Ellipse hosted by Ryan Seacrest. It was an Orwellian exercise in branding, nothing more. The sole point was to give cover to our habitual practice of cozying up to despots (especially those who control the oil spigots) and to our own government’s embrace of warrantless wiretapping and torture, among other policies that invert our values.

Even if Mr. Bush had the guts to condemn General Musharraf, there is no longer any moral high ground left for him to stand on. Quite the contrary. Rather than set a democratic example, our president has instead served as a model of unconstitutional behavior, eagerly emulated by his Pakistani acolyte.

To believe that this corruption will simply evaporate when the Bush presidency is done is to underestimate the permanent erosion inflicted over the past six years. What was once shocking and unacceptable in America has now been internalized as the new normal.

This is most apparent in the Republican presidential race, where most of the candidates seem to be running for dictator and make no apologies for it. They’re falling over each other to expand Gitmo, see who can promise the most torture and abridge the largest number of constitutional rights. The front-runner, Rudy Giuliani, boasts a proven record in extralegal executive power grabs, Musharraf-style: After 9/11 he tried to mount a coup, floating the idea that he stay on as mayor in defiance of New York’s term-limits law.

What makes the Democrats’ Mukasey cave-in so depressing is that it shows how far even exemplary sticklers for the law like Senators Feinstein and Schumer have lowered democracy’s bar. When they argued that Mr. Mukasey should be confirmed because he’s not as horrifying as Mr. Gonzales or as the acting attorney general who might get the job otherwise, they sounded whipped. After all these years of Bush-Cheney torture, they’ll say things they know are false just to move on.

In a Times OpEd article justifying his reluctant vote to confirm a man Dick Cheney promised would make “an outstanding attorney general,” Mr. Schumer observed that waterboarding is already “illegal under current laws and conventions.” But then he vowed to support a new bill “explicitly” making waterboarding illegal because Mr. Mukasey pledged to enforce it. Whatever. Even if Congress were to pass such legislation, Mr. Bush would veto it, and even if the veto were by some miracle overturned, Mr. Bush would void the law with a “signing statement.” That’s what he effectively did in 2005 when he signed a bill that its authors thought outlawed the torture of detainees.

That Mr. Schumer is willing to employ blatant Catch-22 illogic to pretend that Mr. Mukasey’s pledge on waterboarding has any force shows what pathetic crumbs the Democrats will settle for after all these years of being beaten down. The judges and lawyers challenging General Musharraf have more fight left in them than this. 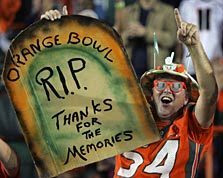 A phonograph in a wireless world.

That’s what the Orange Bowl was at the end.

All around the antique, there are iPods and computers and digital downloads. But the old lady, scratched and weary, could still be cranked up to transport you to that magical place where yesterday feels better than today. And she did it again Saturday night, one last time. Like the phonograph, she allowed you to close your eyes and let the music wash over you along with the memories.

Soon, the wrecking balls will come. And it will feel like they’ve paved over a piece of your childhood. As Bette Davis famously said, ”Old age is no place for sissies.” But Saturday was the celebratory toast before the tears. And it didn’t much matter that Miami’s beloved Hurricanes were losing 31-0 by halftime. This last night couldn’t be marred by the scoreboard any more than a happy couple celebrating their 50th anniversary could be dampened because someone spilled a drink on the table.

The Orange Bowl has been the regal queen of this old neighborhood for more than seven decades now, pulling everyone in the surroundings closer to all her lights and all her life. From a different time, she was. Old Miami. Standing regally even in old age amid the barbershops and joyerias and bakeries and coin laundries and locksmiths and dollar stores and cafeterias. Part beacon, part landmark. You could see her lights at night from far away. Feel them, too.

So at 7:14 p.m., when former Hurricane Dwayne ”The Rock” Johnson introduced the Hurricanes through that tunnel smoke for the final time, you could hear the noise reverberating throughout the old neighborhood in a way that all of South Florida’s languages could understand. People of all colors and creeds had gravitated toward her warmth again to laugh and to live and to make the kind of good noise that always echoed well beyond her rusty gates on the most memorable nights. Too bad that Miami’s team couldn’t live up to the night, or that the noise couldn’t echo much beyond kickoff.

You know the scene that repeated itself most often before the game, though? Pals gathering for photos with the Orange Bowl in the backdrop, like an old friend. College pals three decades removed from campus who had flown in from all over. Police officers on duty. Sorority sisters who hadn’t tailgated together since before having husbands and kids.

Put all those snapshots in the scrapbook as a representation for what this place always did for them. And remember, forever, that all of those people with their arms around each other in all those photos were smiling.

– Opus: Living life to the fullest.