Dan Fogelberg, the singer and songwriter whose hits “Leader of the Band” and “Same Old Lang Syne” helped define the soft-rock era, died Sunday at his home in Maine after battling prostate cancer.

His death was announced Sunday in a statement by Anna Loynes of the Solters & Digney public relations agency, and was also posted on the singer’s Web site.

“Dan left us this morning at 6 a.m. He fought a brave battle with cancer and died peacefully at home in Maine with his wife, Jean, at his side,” it read. “His strength, dignity and grace in the face of the daunting challenges of this disease were an inspiration to all who knew him.”

Fogelberg, 56, was found in 2004 to have advanced prostate cancer. In a statement then, he thanked fans for their support: “It is truly overwhelming and humbling to realize how many lives my music has touched so deeply all these years. … I thank you from the very depths of my heart.”

Fogelberg’s music was powerful in its simplicity. He didn’t rely on the volume of his voice to convey his emotions; instead, they came through in the soft, tender delivery and his poignant lyrics. Songs like “Same Old Lang Syne” — in which a man reminisces after meeting an old girlfriend by chance during the holidays — became classics not only because of his performance, but for the engaging storyline, as well.

His song “Nether Lands” is on my piano. 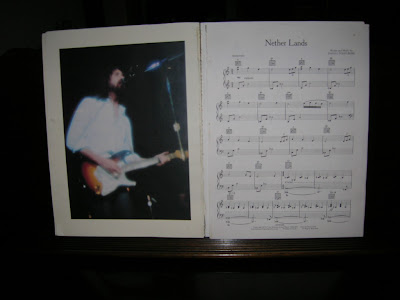 Nether Lands
I first heard the song when I was living in the Colorado mountains. It made an immediate connection with me and I can’t listen to it without being deeply touched and reminded of how much it speaks of my own life’s journey.

High on this mountain
The clouds down below
I’m feeling so strong and alive
From this rocky perch
I’ll continue to search
For the wind
And the snow
And the sky
I want a lover
I want some friends
And I want to live in the sun
And I want to do all the things that I
never have done.

Sunny bright mornings
And pale moonlit nights
Keep me from feeling alone
Now, I’m learning to fly
And this freedom is like
Nothing that I’ve ever known
I’ve seen the bottom
And I’ve been on top
But mostly I’ve lived in between
And where do you go
When you get to the end of
your dream?

Off in the nether lands
I heard a sound
Like the beating of heavenly wings
And deep in my brain
I can hear a refrain
Of my soul as she rises and sings
Anthems to glory and
Anthems to love and
Hymns filled with early delight
Like the songs that the darkness
Composes to worship the light.

Once in a vision
I came on some woods
And stood at a fork in the road
My choices were clear
Yet I froze with the fear
Of not knowing which way to go
One road was simple
Acceptance of life
The other road offered sweet peace
When I made my decision
My vision became my release.