– The Fix Was In: Morris D. Davis explains why he quit as chief prosecutor at Gitmo.

I was the chief prosecutor for the military commissions at Guantánamo Bay, Cuba, until Oct. 4, the day I concluded that full, fair and open trials were not possible under the current system. I resigned on that day because I felt that the system had become deeply politicized and that I could no longer do my job effectively or responsibly.

In my view — and I think most lawyers would agree — it is absolutely critical to the legitimacy of the military commissions that they be conducted in an atmosphere of honesty and impartiality. Yet the political appointee known as the ”convening authority” — a title with no counterpart in civilian courts — was not living up to that obligation.

In a nutshell, the convening authority is supposed to be objective — not predisposed for the prosecution or defense — and must make important decisions at various stages in the process. The convening authority decides which charges filed by the prosecution go to trial and which are dismissed, chooses who serves on the jury, decides whether to approve requests for experts and reassesses findings of guilt and sentences, among other things.

• Earlier this year, Susan Crawford was appointed by the U.S. secretary of defense to replace Maj. Gen. John Altenburg as the convening authority. Altenburg’s staff had kept its distance from the prosecution to preserve its impartiality. But Crawford had her staff assessing evidence before the filing of charges, directing the prosecution’s pretrial preparation of cases (which began while I was on medical leave), drafting charges against people who were accused and assigning prosecutors to cases, among other things.

How can you direct someone to do something — use specific evidence to bring specific charges against a specific person at a specific time, for instance — and later make an impartial assessment of whether they behaved properly? Intermingling convening authority and prosecutor roles perpetuates the perception of a rigged process stacked against the accused.

• The second reason I resigned is that I believe even the most perfect trial in history will be viewed with skepticism if it is conducted behind closed doors. Telling the world, ”Trust me, you would have been impressed if only you could have seen what we did in the courtroom” will not bolster our standing as defenders of justice. Getting evidence through the classification review process to allow its use in open hearings is time-consuming, but it is time well spent.

Crawford, however, thought it unnecessary to wait because the rules permit closed proceedings. There is no doubt that some portions of some trials must be closed to protect classified information, but that should be the last option after exhausting all reasonable alternatives. Transparency is critical.

• Finally, I resigned because of two memos signed by U.S. Deputy Secretary of Defense Gordon England that placed the chief prosecutor — that was me — in a chain of command under Defense Department General Counsel William J. Haynes. Haynes was a controversial nominee for a lifetime appointment to the 4th U.S. Circuit Court of Appeals, but his nomination died in January 2007, in part because of his role in authorizing the use of the aggressive interrogation techniques some people call torture.

I had instructed the prosecutors in September 2005 that we would not offer any evidence derived by waterboarding, one of the aggressive interrogation techniques the administration has sanctioned. Haynes and I have different perspectives and support different agendas, and the decision to give him command over the chief prosecutor’s office cast a shadow over the integrity of military commissions. I resigned a few hours after I was informed of Haynes’ place in my chain of command.

The Military Commissions Act provides a foundation for fair trials, but some changes are clearly necessary. I was confident in full, fair and open trials when Gen. Altenburg was the convening authority and Brig. Gen. Tom Hemingway was his legal advisor. Collectively, they spent nearly 65 years in active duty, and they were committed to ensuring the integrity of military law. They acted on principle rather than politics.

The first step, if these are truly military commissions and not merely a political smoke screen, is to take control out of the hands of political appointees like Haynes and Crawford and give it back to the military.

The president first authorized military commissions in November 2001, more than six years ago, and the lack of progress is obvious. Only one war-crime case has been completed. It is time for the political appointees who created this quagmire to let go.

U.S. Sens. John McCain and Lindsey Graham have said that how we treat the enemy says more about us than it does about him. If we want these military commissions to say anything good about us, it’s time to take the politics out of military commissions, give the military control over the process, and make the proceedings open and transparent.

THIS campaign season has been in desperate need of its own reincarnation of Howard Beale from “Network”: a TV talking head who would get mad as hell and not take it anymore. Last weekend that prayer was answered when Lawrence O’Donnell, an excitable Democratic analyst, seized a YouTube moment while appearing on one of the Beltway’s more repellent Sunday bloviathons, “The McLaughlin Group.”

Pushed over the edge by his peers’ polite chatter about Mitt Romney’s sermon on “Faith in America,” Mr. O’Donnell branded the speech “the worst” of his lifetime. Then he went on a rampage about Mr. Romney’s Mormon religion, shouting (among other things) that until 1978 it was “an officially racist faith.”

That claim just happens to be true. As the jaws of his scandalized co-stars dropped around him, Mr. O’Donnell then raised the rude question that almost no one in Washington asks aloud: Why didn’t Mr. Romney publicly renounce his church’s discriminatory practices before they were revoked? As the scion of one of America’s most prominent Mormon families, he might have made a difference. It’s not as if he was a toddler. By 1978 — the same year his contemporary, Bill Clinton, was elected governor in Arkansas — Mr. Romney had entered his 30s.

The answer is simple. Mr. Romney didn’t fight his church’s institutionalized apartheid, whatever his private misgivings, because that’s his character. Though he is trying to sell himself as a leader, he is actually a follower and a panderer, as confirmed by his flip-flops on nearly every issue.

Concern for minorities isn’t a high priority either. The Christian Science Monitor and others have published reports that Mr. Romney has said he wouldn’t include a Muslim in his cabinet. (He denies it.) In “Faith in America,” he exempted Americans who don’t practice a religion from “freedom” and warned ominously of shadowy, unidentified cabalists “intent on establishing a new religion in America — the religion of secularism.” Perhaps today, in his scheduled turn on “Meet the Press,” he will inveigh against a new war on Christmas being plotted by an axis of evil composed of Muslims, secularists and illegal immigrants.

As Mr. O’Donnell said in his tirade, it’s incredible that Mr. Romney’s prejudices get a free pass from so many commentators. “Faith in America” was hyped in advance as one of the year’s “big, emotional campaign moments” by Mark Halperin of Time. In its wake, the dean of Beltway opinion, David Broder of The Washington Post, praised Mr. Romney for possessing values “exactly those I would hope a leader would have.”

But Washington is nothing if not consistent in misreading this election. Even as pundits overstated the significance of “Faith in America,” so they misunderstood and trivialized the other faith-based political show unfolding this holiday season, “Oprahpalooza.” And with the same faulty logic.

The inclusiveness preached by Obama-Oprah is practiced by the other Democrats in the presidential race, Mrs. Clinton most certainly included. Is Mr. Obama gaining votes over rivals with often interchangeable views because some white voters feel better about themselves if they vote for an African-American? Or is it because Mrs. Clinton’s shrill campaign continues to cast her as Nixon to Mr. Obama’s Kennedy? Even after she apologized to Mr. Obama for a top adviser’s “unauthorized” invocation of Mr. Obama’s long-admitted drug use as a young man, her chief strategist, Mark Penn, was apparently authorized to go on “Hardball” to sleazily insinuate the word “cocaine” into prime time again. Somewhere Tricky Dick is laughing.

But it just may be possible that the single biggest boost to the Obama campaign is not white liberal self-congratulation or the Clinton camp’s self-immolation, but the collective nastiness of the Republican field. Just when you think the tone can’t get any uglier, it does. Last week Mike Huckabee, who only recently stood out for his kind words about illegal immigrants, accepted an endorsement from a founder of the Minutemen, whose approach to stopping the “illegal alien invasion” has been embraced by white supremacists and who have been condemned as “vigilantes” by President Bush.

For those Americans looking for the most unambiguous way to repudiate politicians who are trying to divide the country by faith, ethnicity, sexuality and race, Mr. Obama is nothing if not the most direct shot. After hearing someone like Mitt Romney preach his narrow, exclusionist idea of “Faith in America,” some Americans may simply see a vote for Mr. Obama as a vote for faith in America itself.

– Christmas in Florida: We don’t have snow glistening in the lane or Jack Frost nipping at your nose, but we do have things like the boat parade on the New River in Fort Lauderdale. 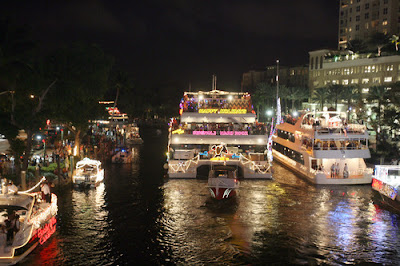 High on the bow of the majestic, 130-foot Grand Floridian, Lorraine Bracco let loose with a fitting greeting from an actress who portrayed a TV mob psychiatrist:

For the first time in its 36-year history, Fort Lauderdale’s signature holiday event, the Winterfest Boat Parade, made stately passage Saturday night down the New River. Vessels adorned in all manner of holiday whimsy, both traditional and playful, cast glittering reflections in the dark water.

Some 80 boats glided past the county lockup, past the AutoNation Building whose roof spewed fireworks, and past thousands of hooting, cheering, waving spectators.

“The nice thing about this is we’re close,” said Marc Sternberg, 56, of Fort Lauderdale. “You can see the boats really close, all the music, the lights, everything.”

Amid the blustery evening, echoes of music bounced off downtown buildings and children gaped awestruck on the riverbank. The boats dazzled, not only in their decorations, but also in the sophistication of their design.

They sported snowflakes, red bows and bells, green garlands, American flags, dolphins, snowmen and even a rainbow. An inflatable Homer Simpson Santa Claus bobbed atop one boat’s bridge. A sailboat’s mast and rigging was transformed into a Christmas tree. One vessel displayed an oversized menorah and dreidel. Another became Noah’s Ark, full of artfully crafted cutout animals.

Several large mega-yachts took imaginative — and expensive — pains to reflect the parade’s theme of Magical Movie Moments. There were Wizard of Oz characters outlined in lights. King Kong raged on one bow. The Blues Brothers appeared in lights and on a wide-screen TV on the side of another massive yacht.

“I really like that gondola thing,” said her pal Kyle Childrey, 26, also of Fort Lauderdale.

The boats threaded their way east on the New River, then north on the Intracoastal Waterway to Lake Santa Barbara in Pompano Beach. In previous years the parade started at Port Everglades and traveled directly north to the same destination. Organizers this year opted for the downtown route to allow for more spectators and boost downtown merchants’ profits.