One of the annoyances of living in South Florida is that we rarely, if ever, get freezing temperatures.

Okay, I can hear it now: “Hey, Mustang Bobby, aren’t you the one who says you don’t do winter and that you’ll never again live in a place where you can walk into a hardware store and buy a snow shovel?” That is true. But one of the advantages of the occasional freeze is that they kill fleas. 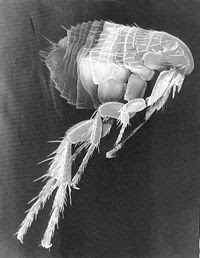 We are having our annual infestation. Last week I got the usual warning signs — bites around the ankles — and I bombed the house with the last of the Raid deep foggers from the last infestation. But more came in from the yard and the bites grew in numbers, so Sunday I went off to Home Depot and picked up the Ortho lawn insect spray and more Raid.

I’ve done some research into the non-chemical methods of flea control, including the benign nematodes — nearly microscopic bugs that eat fleas but don’t harm the environment — and other non-invasive methods to control fleas. But once the fleas are in the house, you don’t have much choice but chemical warfare. I spent yesterday washing all the towels and bed linens in hot water and bleach and this morning set off more Raid bombs.

It’s either that or wear flea collars around my ankles, and I don’t have the shoes to go with them.