Mike Huckabee has a new ad that prominently displays the Jesus Fish. 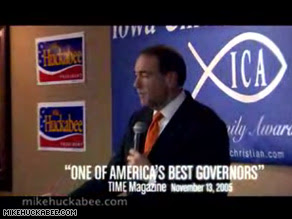 For the second time in the past two weeks, presidential hopeful Mike Huckabee has aired a commercial in which a Christian symbol appears in the background.

In the campaign ad, Huckabee is addressing members of the Iowa Christian Alliance, an organization whose symbol is the ichthys which appears on a banner that is shown prominently at the open and close of the 30 second spot. The ICA is an influential social conservative organization in Iowa, and Huckabee can be seen speaking about his opposition to abortion before the group.

The ichthys, which resembles a fish, is well-known in evangelical circles as the symbol used by early Christians to secretly identify one another without attracting persecution.

The Huckabee campaign unveiled this ad as well as another on its campaign Web site Monday afternoon, hours after the former Arkansas governor reversed course and decided against airing a negative campaign commercial targeting rival Mitt Romney.“Our Values” is currently airing in Iowa, while “Tax Cuts Matter” is airing in New Hampshire, according to a campaign spokeswoman.

I don’t know why the Huckabee people are being so coy about dog-whistling to the fundamentalists. It’s not like it’s a big secret that the former Arkansas governor was a Baptist preacher before he took office, and it’s not like his campaign people don’t know what they’re doing with these little “secret” symbols like the cross-in-the-bookshelf and so on. They knew exactly what was going on, and I’m sure that they knew that they would get the reaction they did. They were counting on it.

It plays right into their pathology. The Christian fundamentalists have raised the culture of victimhood to a high art, and yet no other group has managed to take over the base of a political party, dominate the debate on reproductive choice, dictate the science curriculum in public schools, impose their will on federal funding of scientific research, and persecute another minority — the gay community — with impunity like they have. And yet they claim they are persecuted themselves at the hands of the secular humanists and the godless liberals, and the reaction to the Huckabee Christmas commercial proved it. (Ironically, the most vitriolic reaction came from the mainline GOP pundits who see Huckabee as an uninvited hillbilly cousin to their nice little garden party of “respectable” candidates like, uh… Mitt? Rudy? Fred?) So now the Huckabee campaign can play the victim and say that everybody’s ganging up on Mr. Huckabee because he’s not ashamed to talk about his faith. His not-so-secret signals to his fundamentalist followers are just one more way of reinforcing his claim of being picked on by the big bad meanies in the establishment who look down their noses at honest people of faith. Awww…

Frankly, I don’t care whether or not Mike Huckabee is a Baptist or not or whether he was once a preacher. As far as I can see, he’s on the wrong side of a lot of issues that I and a lot of other people care about — reproductive choice and gay rights to name just a couple — and he doesn’t know beans about foreign policy (except the fact that he proved on Meet the Press on Sunday that he can memorize names). How he arrived at those positions, whether it’s faith-based or whatever, doesn’t matter as much as what he does when he acts on them, and to quote him, it’s how you behave that matters. I have no doubt whatsoever that should someone like Mr. Huckabee be elected, he will continue to behave in exactly the same way he’s shown in the campaign so far, fish symbols and dog whistles or not, and that’s reason enough to vote for someone else.