It’s been a week of theatre, politics, and cold weather. Let that set the tone.

– To Boldly Go… Patrick Stewart returns to his roots — Shakespeare — but fondly remembers the years on the bridge of the Enterprise. 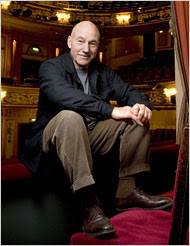 The first reinvention of the British actor Patrick Stewart was so counterintuitive as to seem perverse. For nearly 20 years he had been a stalwart of the Royal Shakespeare Company; suddenly, in 1987, he was the captain of a spaceship on an American television series, acting alongside a gold-tinted android and a large hairy Klingon.

For some reason it worked. With his aura of stern yet fair authority and seriousness of purpose, Mr. Stewart made Capt. Jean-Luc Picard the moral center of “Star Trek: The Next Generation” across seven seasons, helping to keep it from sliding into camp or self-parody. Hollywood took to him, and he took to Hollywood, also appearing in various “Star Trek” films and, in a variation on a theme, as Professor Xavier in the “X-Men” movies.

Now, at the age of 67, Mr. Stewart is in the midst of a third act in his unlikely career that brings him full circle: back to England and back to the Shakespeare of his youth. And while his earlier professional life here was, by his own estimation, “very sound but never spectacular,” his new incarnation, in roles like Prospero in “The Tempest” and Antony in “Antony and Cleopatra,” has been a revelation. Critics who sniffed that he had sold out “to zoom about television screens in a preposterous spacesuit,” as Nicholas de Jongh put it in The Evening Standard of London, have showered him with perhaps the highest compliment they can conjure. He has, they say, overcome the technique-destroying indignity of being a major American television star.

(That works both ways. “There’s always this sense in Los Angeles that if you’re doing theater, it’s because you can’t get film or even television work,” Mr. Stewart said.)

Mr. Stewart’s latest performance, in the title role of Rupert Goold’s stunningly staged “Macbeth,” which opened at the Chichester Festival last summer and sold out its subsequent West End run, has been his most celebrated so far. Now scheduled to open next month at the Brooklyn Academy of Music’s Harvey Theater, the production inspired several British newspaper critics to pronounce it the “Macbeth” of a lifetime, the best they have ever seen. (And they see a lot of Shakespeare.) Mr. de Jongh called Mr. Stewart “one of our finest Shakespearean actors”; Charles Spencer in The Daily Telegraph said he had turned in “a truly great performance.”

“So charismatic is Stewart as an actor that he can make the simple act of preparing a ham sandwich one of the scariest things you’ve ever seen,” Mr. Spencer wrote.

– How the Republicans Could Win: Frank Rich on how two names from the past — Bill Clinton and John McCain — could get the Democrats to lose it all. 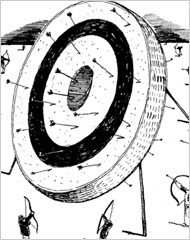 People don’t change. Bill Clinton, having always lived on the edge, is back on the precipice. When he repeatedly complains that the press has given Mr. Obama a free ride and over-investigated the Clintons, he seems to be tempting the fates, given all the reporting still to be done on his post-presidential business. When he says, as he did on Monday, that “whatever I do should be totally transparent,” it’s almost as if he’s setting himself up for a fall. There’s little more transparency at “Little Rock’s Fort Knox” than there is at Giuliani Partners.

“The Republicans are not going to have any compunctions about asking anybody anything,” Mrs. Clinton lectured Mr. Obama. Maybe so, but Republicans are smart enough not to start asking until after she has secured the nomination.

Not all Republicans are smart enough, however, to recognize the value of John McCain should Mrs. Clinton emerge as the nominee. He’s a bazooka aimed at most every rationale she’s offered for her candidacy.

In a McCain vs. Billary race, the Democrats will sacrifice the most highly desired commodity by the entire electorate, change; the party will be mired in déjà 1990s all over again. Mrs. Clinton’s spiel about being “tested” by her “35 years of experience” won’t fly either. The moment she attempts it, Mr. McCain will run an ad about how he was being tested when those 35 years began, in 1973. It was that spring when he emerged from five-plus years of incarceration at the Hanoi Hilton while Billary was still bivouacked at Yale Law School. And can Mrs. Clinton presume to sell herself as best equipped to be commander in chief “on Day One” when opposing an actual commander and war hero? I don’t think so.

If Mr. Obama doesn’t fight, no one else will. Few national Democratic leaders have the courage to stand up to the Clintons. Even in defeat, Mr. Obama may at least help wake up a party slipping into denial. Any Democrat who seriously thinks that Bill will fade away if Hillary wins the nomination — let alone that the Clintons will escape being fully vetted — is a Democrat who, as the man said, believes in fairy tales.

– Remembering the Big Blizzard: Thirty years ago a killer snowstorm hit Toledo, Ohio, and some people still have reminders. 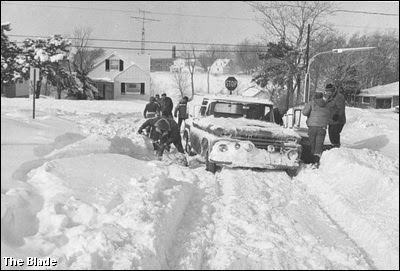 There’s snowfall and there are winter storms. Then there are blizzards of the century — when it snows so hard it snows sideways.

These are the times nature unleashes such a furious mix of snow, cold, and wind that it becomes a benchmark by which every future blizzard gets measured.

Such was the Blizzard of 1978, the most powerful winter storm to hit Ohio in the 20th century.

It struck parts of the Midwest and the Ohio Valley 30 years ago this weekend, hammering northwest Ohio with 13 inches of snow, wind gusts that topped 50 mph, and subzero wind chill temperatures.

In Toledo, the barometric pressure plunged to a record 28.48 in the early morning of Jan. 26 as the entire region got whited-out overnight.

Life came to a standstill.

Snow drifts up to 16 feet consumed mobile homes and piled as high as two-story houses. Roads and highways became littered with buried cars. Entire towns and villages were forced to “close,” as were interstates and the Ohio Turnpike. President Jimmy Carter declared a state of emergency in Ohio.

Motorists were prohibited from the roads, which were physically impassable anyway to most vehicles. Snowmobiles, normally banned from city streets as a nuisance, became crucial for the rescue of stranded motorists and for ferrying food and supplies.

“It’s funny how the devil suddenly becomes an angel,” said William T. O’Connor, a retired Toledo Fire Department captain who worked in communications during the blizzard.

Caught in stalled cars or unheated homes, men and women froze to death. Sixty-one people died in Ohio as a result of the storm, including nearly a dozen in northwest Ohio and more than 20 in Michigan.

Kotz said he walked to a village store to stock up on food.

“I don’t remember everything I picked up. But I do remember my wife asking for two things: some red wine and a German chocolate cake,” he said.

Two weeks later, Mrs. Kotz, who was 30, gave birth to the couple’s first child, Jason. They now live in rural western Pennsylvania, about seven miles from the nearest town.

“It’s been 32 degrees below zero out here, but nothing fazes us anymore after going through that blizzard,” Mr. Kotz said.

“Preserving a historical event was the idea,” the 72-year-old said.

Mr. Dressel, who is an uncle of slain Toledo police Detective Keith Dressel, was an electronic technician at Toledo Express Airport in 1978. In the week following the storm, Mr. Dressel said, he filled the bed of his pickup truck with snow from the airport’s parking lot.

He chose the snow at Toledo Express, he said, because that’s where official weather readings are recorded.

“I just shoveled the snow directly into the truck,” Mr. Dressel recalled last week. “People wondered what … I was doing and I said, ‘Just watch, you’ll know.’”

He then drove home and hauled the snow in buckets to his basement laundry room, where it was put to melt in 5-gallon jugs and dozens of small glass bottles that were commonly used for injection medicines.

Those initial 40 gallons of blizzard water have dwindled over the years as Mr. Dressel gave away and even sold bottles.

In 1980 he put a classified ad in The Blade: “Snow water from Blizzard of ’78. Make Offer.” Yet the advertisement was more for fun than making money, he said.

“I gave a bottle to someone two weeks ago,” Mr. Dressel said. “They were in the blizzard and they wanted a bottle, and they knew I had it, so I gave them a bottle.”

I missed it; I was living in Santa Fe, New Mexico that winter. But my friends and family who were there still talk about it.

– Opus: A message from Mom.