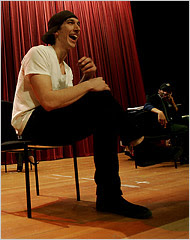 As entertainment for grown men, it was — well, here’s how Mr. Driver put it: “I mean, how dumb do they think we are?”

Which is why Mr. Driver, current third-year drama student at the Juilliard School, was here this week with a jazz trio and five actors for an evening of music and monologues by contemporary playwrights like Lanford Wilson, John Patrick Shanley and Jane Martin. He is hoping to prove to reluctant officials that serious theater — viewed by some in the military, Mr. Driver said, as “sissies running around stage in tights” — would not only work at Camp Pendleton but also be excellent for troops in war zones, where the entertainment options are much scarcer.

Which is why this 24-year-old student in one of the most intensive acting programs in the country has struggled, largely on his own, to pull together successful Juilliard alums like Laura Linney, Tracie Thoms and David Denman to put on something completely out of the ordinary at Camp Pendleton.

Read the whole story; it’s proof that theatre, even if it’s one person standing on a bare stage, can move the world.

O for a Muse of fire, that would ascend
The brightest heaven of invention,
A kingdom for a stage, princes to act
And monarchs to behold the swelling scene!
Then should the warlike Harry, like himself,
Assume the port of Mars; and at his heels,
Leash’d in like hounds, should famine, sword and fire
Crouch for employment. But pardon, and gentles all,
The flat unraised spirits that have dared
On this unworthy scaffold to bring forth
So great an object: can this cockpit hold
The vasty fields of France? or may we cram
Within this wooden O the very casques
That did affright the air at Agincourt?
O, pardon! since a crooked figure may
Attest in little place a million;
And let us, ciphers to this great accompt,
On your imaginary forces work.
Suppose within the girdle of these walls
Are now confined two mighty monarchies,
Whose high upreared and abutting fronts
The perilous narrow ocean parts asunder:
Piece out our imperfections with your thoughts;
Into a thousand parts divide on man,
And make imaginary puissance;
Think when we talk of horses, that you see them
Printing their proud hoofs i’ the receiving earth;
For ’tis your thoughts that now must deck our kings,
Carry them here and there; jumping o’er times,
Turning the accomplishment of many years
Into an hour-glass: for the which supply,
Admit me Chorus to this history;
Who prologue-like your humble patience pray,
Gently to hear, kindly to judge, our play.