Mike Huckabee has deftly made his faith the cornerstone of his campaign; talking about his background as a Baptist preacher, saying that it “defines him,” sending subtle (and not so subtle) signals to his followers that he is a Christian, not to mention his Old Testament views of “traditional” family values and his stated desire to bring the Constitution up to God’s standards, whatever that means and whatever God he’s talking about.

Naturally this has attracted the attention and the ire of a lot of people. So, what would they say if a Democrat put out a flier that touted him as a “committed Christian” and posing in a pulpit with big white cross in the background? 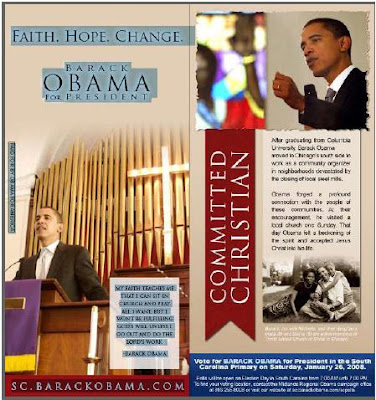 Granted, the circumstances are different for Barack Obama. He’s not been campaigning on his faith, and he’s also been the victim of a vicious smear campaign against him, claiming that he’s secretly a Muslim and that he went to a Muslim school when he lived in Indonesia as a child. Also notice that this flier is being handed out in South Carolina, and if there is a state that has more fundamentalists per square mile than South Carolina, even in the Democratic party, I’ve not heard of it. So it’s understandable that the Obama campaign would take on the accoutrements of the region and talk to the voters in terms they understand.

I also think that the difference between Mr. Obama and Mr. Huckabee is pretty stark. When Mr. Huckabee speaks to a crowd about his desire to reshape the Constitution to reflect God’s will, we know he means it. I have yet to hear that Mr. Obama wants to slip the Ten Commandments into the Bill of Rights, and he hasn’t voiced support for the Federal Marriage Amendment and the Human Life Amendment. This flier is more his attempt to make it clear to the voters that in spite of all the rumors and the middle name that speaks of Islam, he’s really one of them, too.

Fine, but this is just one more sign that religion has become far too big an issue in this campaign, and it’s creeping me out.