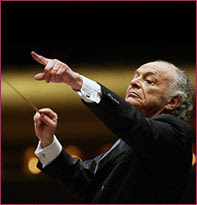 They came bearing bows and basses rather than the arms and armor Americans carried the last time this large a contingent set foot in the North Korean capital. The brass will issue fanfares, not orders.

Critics hold out little hope that this updated version of ping-pong diplomacy, sports and cultural exchanges that helped warm relations with Maoist China in the 1970s, will do much to transform North Korea under Kim Jong-il. Mr. Kim has cracked open North Korea’s door to outside businessmen, sports teams and diplomats in the past without allowing significantly more pluralism in the country’s regimented economic and political life, and there are few signs that the arrival of the New York orchestra signals a major shift in direction.

The program will include “An American in Paris” by George Gershwin, Symphony No. 9 “From the New World” by Antonin Dvorák, Prelude to Act III from “Lohengrin” by Richard Wagner, and the overture to “Candide” by Leonard Bernstein.

It will be broadcast later this week on PBS. Check local listings.