In the spirit of Valentines Day, the Miami Metrozoo put on its annual show Sex Among the Animals. 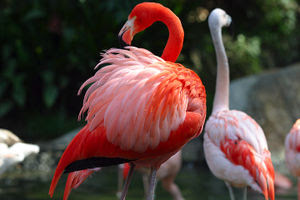 Hosted by zoo ambassador Ron Magill, the popular lecture attracted more than 400 people to see and hear the intimate details of how wild things do the wild thing.

”This is the fifth time in a row this thing has sold out,” Magill said. ”And I’ll tell you why — everybody wants to hear about sex.”

Magill dropped plenty of nuggets of who-knew? information, such as:

• Flamingos like to have sex with others watching them. Two of the birds will get down while 30 others look on.

• Frogs sometimes do it with two or more partners at a time. Most animals are not monogamous, Magill said.

• Female pandas only have a three-day window each year to get pregnant. Zookeepers have shown the pandas films of other pandas having sex to get them in the mood.

• Tigers in captivity are implanted with birth-control devices so they don’t over-reproduce.

• Some animals are gay, too. ”Homosexuality is found throughout the animal kingdom,” Magill said.

Wait until Fred Phelps finds out about that last one. With any luck he’ll be picketing at Busch Gardens and get eaten by squirrels.