Mad magazine recruits some Pulitzer prize-winner cartoonists to have fun with President Bush. 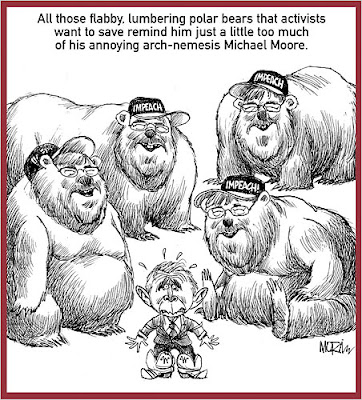 The “usual gang of idiots,” as the editorial staff of Mad magazine lovingly describes itself, produces cultural and political parody every month. For the next issue, however, the gang has recruited some very special help.

“Why George W. Bush Is in Favor of Global Warming,” a two-page spread that the magazine calls an exposé, has been illustrated by 10 Pulitzer Prize-winning editorial cartoonists. They try to offer reasons why environmental apocalypse might be a good thing for President Bush, with observations like, “His worries about how future generations will remember his presidency won’t matter if there are no future generations.”

Other potential upsides are that Iraq could literally be melted off the earth, and rising oceans could submerge lefty strongholds like New York, Boston and San Francisco.

The artists include Mike Peters, who won the Pulitzer in 1981 for his work in The Dayton Daily News in Ohio, and Matt Davies, who won in 2004 for The Journal News of White Plains.

John Ficarra, the editor of Mad, and Sam Viviano, the art director, assembled the team. Mr. Ficarra, who had the idea to find 10 Pulitzer winners, described himself as the Captain Kirk of the operation, and Mr. Viviano, who recruited the cartoonists, as Sulu. “You even said, ‘Make it so,’ ” Mr. Viviano said to Mr. Ficarra during a joint telephone interview.

They said that the artists were all happy to participate. “Everybody, for the most part, who works in humor today has some kind of influence from Mad,” Mr. Viviano said.

“And they still managed to be successful,” Mr. Ficarra added.

A writer for the magazine, Jacob Lambert, came up with the reasons why President Bush might like global warming, and the cartoonists took it from there. Some of them followed the editors’ guidance faithfully, others submitted variations.