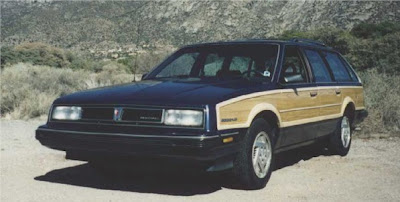 1988 Pontiac 6000 LE Safari
This picture was taken about ten years ago when I lived in New Mexico (hence the un-Florida-like landscape). I’ve owned it since January 1989. I bought it from Hertz Car Sales in Traverse City, Michigan, when it had 5,634 miles on the odometer. It now has about 240,000 on it and has been retired from daily driving since August 2003. But it still runs well and comes in handy for trips to the store and Home Depot.

It’s also a throwback to the childhood memories of the old fake-wood-grain station wagons I grew up with; the Ford Country Squires with the monster V-8’s and the eight-track, the four-abreast seating in the back (“Stop touching me! Mom….!”) and the wayback with the extra seat and muddy paw-prints of Labrador retrievers. All I need is gas at 35 cents a gallon and Ernie Harwell calling a Tigers game on the AM radio.