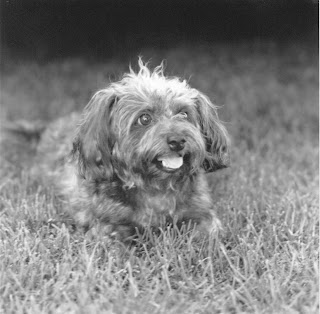 February 1, 1989: Sam was born somewhere in Oklahoma. He was adopted by AJP’s sister and brother-in-law as a companion for their long cross-country trips in their semi. But he developed intestinal worms and they couldn’t keep him, so we adopted him on April 22, 1989, and he lived a long and happy life with us in Colorado, Michigan, and New Mexico. When AJP and I separated in 1999 I kept him and brought him with me to Miami. He was diagnosed with prostate cancer in June 2002 and died on July 20. But he lives on in my memories of a good and faithful friend, and as the mascot and inspiration for Bark Bark Woof Woof.