Prince Harry is being redeployed from Afghanistan. 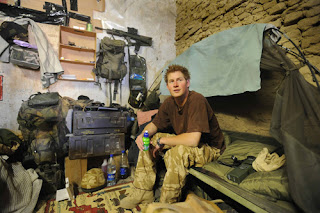 Secrets may be the raw materials of warfare, but short-staffed British commanders in Afghanistan learned four months ago that they would have to devote considerable resources to a secret that the government considered far larger and more dangerous than any of their fighting strategies.

That secret has been known over the radio frequencies of southern Afghanistan for the past 10 weeks as Widow Six Seven, the call sign for a Joint Attack Control officer who directed bomb strikes against suspected Taliban outposts in violent Helmand province.

He was known only to his immediate comrades in the Household Calvary as Second Lieutenant Harry Wales, a name, along with orange locks and a plummy accent, that immediately identified him as Prince Harry, third in line to the English crown.

Amazingly, their secret remained safe for months, amid an elaborate public-relations effort designed to keep the British media on side, and the efforts of scores of officers committed to preventing either the Taliban or the larger British or NATO military forces from learning the identity of the Prince, who had earlier been known as a “bullet magnet” for his target value to insurgents.

But when the secret operation was forced to wrap up Thursday after the Internet leaks, and the entire British media unloaded lengthy interviews and documentaries about the Prince in action Thursday night, there was a palpable sense of relief among Britain’s military commanders.

Sir Richard Dannatt, head of the British army, had never wanted Harry to become part of the military operation, arguing to his political masters that his deployment would distract much-needed people and resources away from combat operations and create unnecessary risk. He won that argument in Iraq, persuading the Prince and his supporters that his presence would be deadly, but last fall he was forced to draw up plans to bring the Prince to Afghanistan.

“In deciding to deploy him to Afghanistan, it was my judgment that, with an understanding with the media not to broadcast his whereabouts, the risk in doing so was manageable,” Sir Richard explained Thursday night. “Now that the story is in the public domain, the chief of defence staff and I will take advice from the operational commanders about whether his deployment can continue.”

On Friday, the Ministry of Defense said Harry is being withdrawn immediately.

Kudos to him for doing his job and setting a good example for other people of privilege.

By the way, it was the Drudge Report that broke the embargo on the news that Prince Harry was stationed in Afghanistan. Never let it be said that Matt Drudge let discretion and the safety of the soldiers stand in the way of making a headline.