– Evangelical and Liberal? Amy Sullivan tells of her blend of faith and politics. 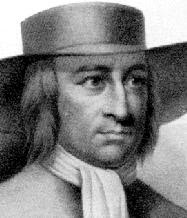 As an evangelical who worked in Democratic politics before entering journalism, I’m used to getting looks from liberals who are embarrassed for me when I use the E-word to describe myself. Confusion flickers across their faces as they instantly reassess my political leanings and intelligence. People who have known me for years start asking whether I watch Fox News and brace for spontaneous proselytizing.

And then there is the more dangerous sort of bias. A few months ago, while participating in an early-morning panel discussion in the heart of Manhattan, I was startled fully awake when a man stood up to declare that Democrats who reached out to religious voters, especially evangelicals, were akin to those who collaborated with the Nazis. I put on a sweet smile of Christian charity and counted to 10.

Comments like that explain why so many of us liberals who also happen to be evangelicals have stayed in the closet for so long. It is hard to overcome decades of suspicion, much of it richly earned by leaders of the religious right who used faith in the cause of a political power grab and in the name of intolerance and fear. But the lingering misconceptions are also painful reminders of the price people like myself have paid for staying silent while others claimed a monopoly on faith. And the country has paid, too.

That thought seems to have been on Sen. Barack Obama’s mind last month, at the end of a presidential debate in Myrtle Beach, S.C. “There have been times,” Obama said, “when our Democratic Party did not reach out as aggressively as we could to evangelicals because the assumption was, well, they don’t agree with us on choice, or they don’t agree with us on gay rights, and so we just shouldn’t show up. . . . And that means that people have a very right-wing perspective in terms of what faith means and of defining our faith.”

Amen. Democrats weren’t just passive nonactors who stood by helplessly while the GOP claimed Christ for itself. Instead of pushing back against conservatives’ insistence that Democrats aren’t religious, the party beat a hasty retreat, ceding the high ground in the competition for religious Christian voters and discussions of morality. The religious divide in U.S. politics that emerged — call it the God gap — represented as much a failure by Democrats as it did an achievement by Republicans.

The first religious bloc that professional Democrats wrote off was the evangelicals, despite the fact that fully 40 percent of born-again Christians describe themselves as politically moderate. Then party officials started to steer clear of Catholic voters, spooked by their opposition to abortion. Michael Dukakis’s 1988 campaign was the first in Democratic history to turn down all invitations to appear at Catholic venues.

Thus isolated, the professionals who run Democratic campaigns fell into a self-reinforcing spiral of misconceptions about the faithful. As being religious became not just declasse but downright dangerous in Democratic circles, religious Democrats silenced themselves. No one wanted to be lumped in with the likes of Jerry Falwell, who went on Pat Robertson’s show “The 700 Club” two days after 9/11 and accused the left of helping cause the attacks.

But now, after 30 years in the wilderness, the Democratic Party is being reborn. The “Come to Jesus” moment was Sen. John F. Kerry’s loss in 2004. Catholic Democrats, shocked at the idea that it might be impossible for one of them to ever again win the White House, banded together to push back against their church and their party. Religious liberals, angered at being left out of the definition of “values voters,” finally rose from their slumber. Kerry himself called on his colleagues to get over their discomfort with matters of faith.

Most important, led by the two main contenders for the party’s 2008 nomination, religious Democrats are publicly reclaiming their faith.

I have no doubt whatsoever that it is possible to be both evangelical and liberal, even if there are those of us who are aligned with a faith and practice — the Quakers — who are aggressively non-evangelical. The Quakers have put their faith and beliefs into political action long before the Religious Reich came into being. The difference is that the Quakers and the liberal churches did it to make the world a better place for everyone, not just the “right” kind of people. 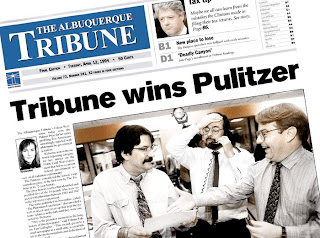 The Albuquerque Tribune will publish its final edition Saturday, ending a buoyant and sometimes bare-knuckled presence as the city’s afternoon newspaper.

E.W. Scripps Co., The Tribune’s Cincinnati-based owner, today said the U.S. Department of Justice — which had closely monitored a six-month effort to sell the newspaper — was aware of the decision to cease publication of the 86-year-old Trib.

The newspaper’s 38 editorial employees were told of Scripps’ decision by Editor Phill Casaus in a staff meeting this morning.

“It’s a difficult day, but there is a lot to celebrate about The Tribune, and I don’t think that’s limited merely to the people who work here or have worked here,” Casaus said.

The Department of Justice was required to monitor the sale or closure because it oversees the newspaper’s joint operating agreement with the Albuquerque Journal. The agreement has allowed the papers to share certain business functions while operating independent newsrooms.

Scripps announced in August it would sell or discontinue publication, saying it had determined the Albuquerque market couldn’t support an afternoon newspaper.

“The loss of The Albuquerque Tribune is profoundly sad for the community, its dedicated staff, and all those great journalists who have contributed over the years to the newspaper’s outstanding reputation for editorial independence and excellence,” said Rich Boehne, executive vice president and chief operating officer for Scripps.

“As The Tribune passes into history, we take some solace in the knowledge that Albuquerque and New Mexico are better places to live today thanks to the newspaper’s commitment to community service,” he added.

The Tribune — which won a Pulitzer Prize in 1994, was a finalist for journalism’s highest award in 1996 and consistently won state and national awards — will publish a commemorative edition Saturday to celebrate its 86 years of covering Albuquerque and New Mexico, Casaus said.

I had a subscription to both the Journal and the Tribune when I lived in Albuquerque, and the Trib’s somewhat liberal editorial page made a nice counterbalance to the Journal’s conservative leanings. And for those of us who still remember when almost every town had two or more papers, it was good for journalism and good for the people. (HT to Brian.)

– Mea Sorta Culpa: Clark Hoyt, the “public editor” for the New York Times, takes the paper to task for raising the whiff of sexual impropriety in the McCain story when it was never proven in the background or the facts of the story.

The uproar was over an assertion in the second paragraph that during McCain’s first run for the White House eight years ago, some of his top advisers became “convinced” he was having a “romantic” relationship with a female lobbyist and intervened to protect the candidate from himself. McCain, 71, and the lobbyist, Vicki Iseman, 40, denied they had an affair, and at a press conference after the article was published, McCain denied that anyone ever confronted him about their relationship. He described her as a friend.

The article had repercussions for both McCain and The Times. He may benefit, at least in the short run, from a conservative backlash against the “liberal” New York Times. The newspaper found itself in the uncomfortable position of being the story as much as publishing the story, in large part because, although it raised one of the most toxic subjects in politics — sex — it offered readers no proof that McCain and Iseman had a romance.

The pity of it is that, without the sex, The Times was on to a good story. McCain, who was reprimanded by the Senate Ethics Committee in 1991 for exercising “poor judgment” by intervening with federal regulators on behalf of a corrupt savings and loan executive, recast himself as a crusader against special interests and the corrupting influence of money in politics. Yet he has continued to maintain complex relationships with lobbyists like Iseman, at whose request he wrote to the Federal Communications Commission to urge a speed-up on a decision affecting one of her clients.

Much of that story has been reported over the years, but it was still worth pulling together to help voters in 2008 better understand the John McCain who might be their next president.

I asked Jill Abramson, the managing editor for news, if The Times could have done the story and left out the allegation about an affair. “That would not have reflected the essential truth of why the aides were alarmed,” she said.

But what the aides believed might not have been the real truth. And if you cannot provide readers with some independent evidence, I think it is wrong to report the suppositions or concerns of anonymous aides about whether the boss is getting into the wrong bed.

Which only goes to prove that timeless adage that sex sells. If the paper had left out the innuendo, the story would have had a lot more impact. As it is, though, especially with the Republicans and their obsession with other peoples’ sex lives, getting past the titillation is the hard part.

YELLOW SPRINGS, Ohio – Antioch College, known for inspiring quirky academic programs that produce students with a passion for free thinking and social activism, has no choice but to close for the 2008-2009 academic year, trustees of the parent Antioch University said yesterday.

Operations will be suspended June 30.

Antioch and Yellow Springs, tie-dyed and liberal-leaning, fed off each other. Students were encouraged to create their own programs for learning.

After two days of meetings in Los Angeles, trustees reaffirmed their June, 2007, decision to close the college for a year. They said they ran out of time to reach a deal on transferring the financially struggling school to a group of alumni, donors, and others with its own board of trustees.

Trustees had reversed their earlier decision in November, contingent on whether alumni and the school could meet fund-raising deadlines. But the college could not overcome declining enrollment, dependence on tuition, and a small endowment.

Trustees said they would continue discussions on a possible transfer of the college, but said it was important to clarify for students, faculty, and staff that they would need to make plans for the next phase in their educations and careers.

The town and school have been fertile ground for social activism and civil disobedience, ranging from anti-Vietnam war protests in the 1960s and ’70s through demonstrations against the Iraq war in recent years.

One of the alumni of Antioch is my older brother.

– Frank Rich: The parallels of history and how Hillary Clinton lost the war.