– Regarding Eustace Tilley:The New Yorker‘s resident dandy gets a make-over. 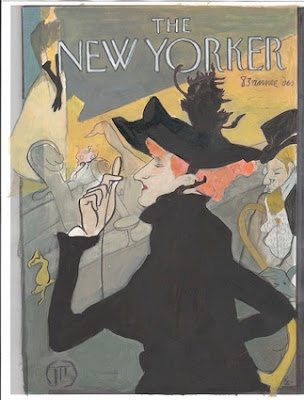 We sent photographs to some of our favorite writers, and the charge was simple: Write a love story in response to the image. The collective results run the gamut of romantic love.

– Frank Rich: Speaking of contests, the Democrats battle for the nomination resembles not so much a race but a civil war.

The untold story in the run-up to Super Tuesday was Hillary Clinton’s elaborate live prime-time special the night before the vote. Presiding from a studio in New York, the candidate took questions from audiences in 21 other cities. She had plugged the event four days earlier in the last gasp of her debate with Barack Obama and paid a small fortune for it: an hour of time on the Hallmark Channel plus satellite TV hookups for the assemblies of supporters stretching from coast to coast.

The same news media that constantly revisited the Oprah-Caroline-Maria rally in California ignored “Voices Across America: A National Town Hall.” The Clinton campaign would no doubt attribute this to press bias, but it scrupulously designed the event to avoid making news. Like the scripted “Ask President Bush” sessions during the 2004 campaign, this town hall seemed to unfold in Stepford. The anodyne questions (“What else would you do to help take care of our veterans?”) merely cued up laundry lists of talking points. Some in attendance appeared to trance out.

But I’m glad I watched every minute, right up until Mrs. Clinton was abruptly cut off in midsentence so Hallmark could resume its previously scheduled programming (a movie promising “A Season for Miracles,” aptly enough). However boring, this show was a dramatic encapsulation of how a once-invincible candidate ended up in a dead heat, crippled by poll-tested corporate packaging that markets her as a synthetic product leeched of most human qualities. What’s more, it offered a naked preview of how nastily the Clintons will fight, whatever the collateral damage to the Democratic Party, in the endgame to come.

– What’s On TV? Give the Almighty the remote, please, and let Him select the newest stuff on the tube, courtesy of Heather Havrilesky at Salon’s “I Like to Watch.”

God wants you to watch more TV. He mentioned this to me while we were drawing Jesus’ face on a bunch of flour tortillas that he plans to serve at a Catholic retreat in New Mexico next weekend. “It bums me out that so many of my flock think they should be working for nonprofit organizations or volunteering for political campaigns. Half of them haven’t even noticed that ‘Paradise Hotel’ is back! Why would they squander my most precious gifts this way?”

“I don’t have the answer to that one, Allah, Yahweh … Which do you prefer these days?”

“Don’t start with me today. I’m not in the mood. Why would I have made humans in my own wishy-washy, dissatisfied image if I didn’t want them to wander around the house in circles, then melt some cheese on top of something and eat it while watching ‘Celebrity Rehab With Dr. Drew'”? God frowned and tugged at his robes as if they were unbearably scratchy.

“I hear you, Almighty Father, but you have to remember that most people are just as full of self-loathing as you are, so when they find themselves enjoying the simple pleasures of, say, an apocalyptic serial drama or a transgender dating show, they think there must be something wrong with them.”

“Guilt was a serious blunder on my part. I thought it would keep people from raping each other’s wives and killing each other with their bare hands, but instead it just gave them anxiety disorders and substance abuse problems.” I nodded along without really listening — sometimes God is just so wound up in his own little dramas.

“I blame myself, frankly. I coddled Shakespeare and Hemingway and those boys because I wanted to encourage them to write their little books and plays, but now it’s like the world thinks it’s not fun to watch hot sluts get drunk and bag on each other. Meanwhile, Willy himself loves that shit — we’re doing ‘Paradise Hotel 2’ night every Monday and ‘Big Brother’ night every Tuesday …”

“Honestly, I think a lot of people are more concerned with the election, the recession, this brutal war we’re waging in Iraq …”

“Oh, stop it. You’re such a downer these days. Hey, look at this one!” God held up the tortilla he was working on. “Doesn’t that look like a tear in his eye? This one’ll wind up in a glass shrine somewhere, mark my words!”