– Leonard Pitts, Jr.: There used to be moderate Republicans.

A week ago, in response to a reader’s question, I wrote that black voters do not support the Republican Party because conservatives have never supported them. Dozens of you challenged that. You sent e-mails asking how I square that judgment with the fact that the Civil Rights Act had significant GOP support.

In a word: easily. See, I never said Republicans have never supported black people. I said that conservatives — ”whether you’re talking Democrats of the 19th and early 20th centuries or Republicans now” — never have. Yes, these days Republican equals conservative. But back in the era of the act, there existed a creature — it seems mythical as the kraken these days — called the moderate Republican.

That’s who lent support to black people. But social conservatives of whatever party? Not so much. The Civil Rights Act bears that out. About 100 of the 126 nay votes in the final House tally were cast by representatives from that foundry of conservatism, the South. This would include Rep. Thomas G. Abernethy of Mississippi, who said the act granted ”dictatorial, gestapo-like” power to the government.

Thankfully, 289 lawmakers stood up for the principle of equality. Know how many were from the conservative South? Twenty-one.

So, with all due respect to my correspondents, what we have here is one of the older rhetorical tricks in the book: If you can’t refute what the person said, pretend he said something else and refute that.

They are interested in having an argument about Republicans versus Democrats. I’m not. Those are just brand names, insignificant except insofar as they convey ideology. As noted, the Republican brand once included moderates; Democrats were the more socially conservative party. That changed, largely as a result of Lyndon Johnson’s support for the Civil Rights and Voting Rights acts. Angered by this affirmation of democratic principles, Democratic conservatives fled their party in droves, running to a GOP that welcomed them with open arms. President Johnson is said to have foreseen that outcome even as he signed the bill. ”We have lost the South for a generation,” he reportedly said.

Which was true and then some. These days the GOP is so thoroughly dominated by conservatism that a rare moderate like John McCain is regarded with wariness and hostility by the party faithful.

For all the Barack Obama-J. F. K. comparisons, whether legitimate or over-the-top, what has often been forgotten is that Mr. Obama’s weaknesses resemble Kennedy’s at least as much as his strengths. But to compensate for those shortcomings, he gets an extra benefit that J. F. K. lacked in 1960. There’s nothing vague about the public’s desire for national renewal in 2008, with a reviled incumbent in the White House and only 19 percent of the population finding the country on the right track, according to the last Wall Street Journal-NBC News poll. America is screaming for change.

Either of the two Democratic contenders will swing the pendulum. Their marginal policy differences notwithstanding, they are both orthodox liberals. As the party’s voters in 22 states step forward on Tuesday, the overriding question they face, as defined by both contenders, is this: Which brand of change is more likely, in Kennedy’s phrase, to get America moving again?

The question about Mr. Obama, of course, is whether he is tough enough to stand up to those in Washington who oppose real reform, whether Republicans or special-interest advocates like, say, Mr. Penn. The jury is certainly out, though Mr. Obama has now started to toughen his critique of the Clintons without sounding whiny. By framing that debate as a choice between the future and the past, he is revisiting the J. F. K. playbook against Ike.

What we also know is that, unlike Mrs. Clinton, Mr. Obama is not hesitant to take on John McCain. He has twice triggered the McCain temper, in spats over ethics reform in 2006 and Mr. McCain’s Baghdad market photo-op last year. In Thursday’s debate, Mr. Obama led an attack on Mr. McCain twice before Mrs. Clinton followed with a wan echo. When Bill Clinton promised that his wife and Mr. McCain’s friendship would ensure a “civilized” campaign, he may have been revealing more than he intended about the perils for Democrats in that matchup.

As Tuesday’s vote looms, all that’s certain is that today’s pollsters and pundits have so far gotten almost everything wrong. Mr. McCain’s campaign had been declared dead. Mrs. Clinton has gone from invincible to near-death to near-invincible again. Mr. Obama was at first not black enough to sweep black votes and then too black to get a sizable white vote in South Carolina.

The 18-0 New England Patriots take the field Sunday for Super Bowl XLII seeking perfection and a place in sports history. But those who have already tread the path to a flawless sports achievement say that finding perfection and fame will be the farthest thing from the Patriots’ minds.

“During my routine and even after it, I did not think it was all that perfect,” said the gymnast Nadia Comaneci, whose unprecedented score of 10.0 at the 1976 Olympics exemplifies perfection on a grand sports stage. “I thought it was pretty good, but athletes don’t think about history when making history. They think about what they’re doing, and that’s how it gets done.”

Tom Brady, the Patriots’ star quarterback, insisted that Sunday’s game would be no different.

“I know it’s a very important game, but we cannot play it like that, like it’s history being played out,” he said Thursday. “It is a football game we want to win, and the only way to do that is to treat it like a football game. It’s not about being perfect. I don’t even know what perfect in sports is.”

With a victory, the Patriots will take their place alongside other landmark sports triumphs, like the boxer Rocky Marciano’s spotless 49-0 career record or the U.C.L.A. basketball teams of the 1960s that had four undefeated national championship seasons.

Like Brady, the speedskater Eric Heiden, who won five gold medals in a sweep of the individual events during the 1980 Olympics, said his approach was not reflective at all.

“I never once thought about the consequences or legacy of my efforts — a perfect Olympics never entered my consideration,” said Heiden, who was so relaxed on the eve of his last race that he overslept and arrived at the skating oval late.

Heiden conceded he might have felt the pressure briefly at the beginning of his final race, the grueling 10,000 meters.

“I wasn’t skating particularly well in the first few laps of that race,” said Heiden, who is now an orthopedic surgeon in Utah. “And what did enter my mind was that I had been training seven years for that moment. It was a rare opportunity that wasn’t ever going to come along again. I started skating faster and better. I certainly wasn’t going to let fatigue or the fear of losing get in the way.”

– Opus: Smarter than the average pollster.

– Thanks again to the cast of Can’t Live Without You at the Manhattan Repertory Theatre for a great run that ended last night. 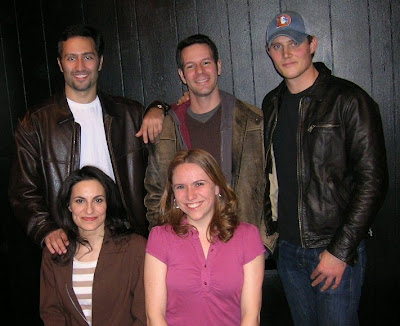