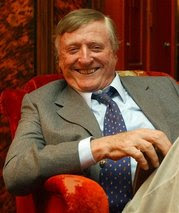 Editor, columnist, novelist, debater, TV talk show star of “Firing Line,” harpsichordist, trans-oceanic sailor and even a good-natured loser in a New York mayor’s race, Buckley worked at a daunting pace, taking as little as 20 minutes to write a column for his magazine, the National Review.

Yet on the platform he was all handsome, reptilian languor, flexing his imposing vocabulary ever so slowly, accenting each point with an arched brow or rolling tongue and savoring an opponent’s discomfort with wide-eyed glee.

“I am, I fully grant, a phenomenon, but not because of any speed in composition,” he wrote in The New York Times Book Review in 1986. “I asked myself the other day, `Who else, on so many issues, has been so right so much of the time?’ I couldn’t think of anyone.”

Buckley had for years been withdrawing from public life, starting in 1990 when he stepped down as top editor of the National Review. In December 1999, he closed down “Firing Line” after a 23-year run, when guests ranged from Richard Nixon to Allen Ginsberg. “You’ve got to end sometime and I’d just as soon not die onstage,” he told the audience.

There were very few things I agreed with him on politically, but I have tremendous respect for his writing, his manners, and most especially his sense of humor. His intelligence, his wit, and his ability to make an argument without insult and rancor is something rare on either side of the aisle.