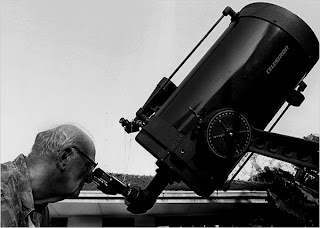 The author of almost 100 books, Mr. Clarke was an ardent promoter of the idea that humanity’s destiny lay beyond the confines of Earth. It was a vision served most vividly by “2001: A Space Odyssey,” the classic 1968 science-fiction film he created with the director Stanley Kubrick and the novel of the same title that he wrote as part of the project.

His work was also prophetic: his detailed forecast of telecommunications satellites in 1945 came more than a decade before the first orbital rocket flight.

Other early advocates of a space program argued that it would pay for itself by jump-starting new technology. Mr. Clarke set his sights higher. Borrowing a phrase from William James, he suggested that exploring the solar system could serve as the “moral equivalent of war,” giving an outlet to energies that might otherwise lead to nuclear holocaust.

Mr. Clarke’s influence on public attitudes toward space was acknowledged by American astronauts and Russian cosmonauts, by scientists like the astronomer Carl Sagan and by movie and television producers. Gene Roddenberry credited Mr. Clarke’s writings with giving him courage to pursue his “Star Trek” project in the face of indifference, even ridicule, from television executives.

In his later years, after settling in Ceylon (now Sri Lanka), Mr. Clarke continued to bask in worldwide acclaim as both a scientific sage and the pre-eminent science fiction writer of the 20th century. In 1998, he was knighted by Queen Elizabeth II.