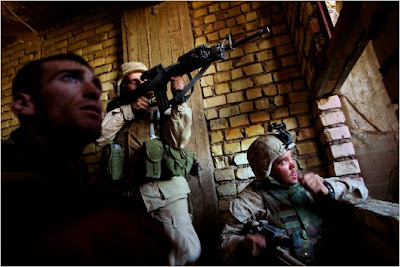 The Baghdad Bureau from the New York Times reports on what Iraq looks like five years after the beginning of the war. (Note: some of the photos are graphic.)

Meanwhile, President Bush thinks everything’s groovy and that it was all worth it… as families in South Florida reflect on their losses from the war.

At some point, you have to stand up and be brave. Stand up like American women and men.

This, we have largely failed to do. Three months after the war began, when it was becoming clear there were no weapons of mass destruction, 56 percent of us told Gallup it didn’t matter, said the invasion was justified regardless. Play that back again: The primary rationale for the war was disintegrating like a sand castle in the waves, yet a majority of us shrugged and said, ”Whatever.” Like our president, we were impervious to truths we did not want to know.

That majority is a memory, but it lasted long past the point it should have, lasted long enough to enable this disaster, to send George W. Bush back to office claiming a mandate, to dig us in so deep the sun feels like a rumor, to create legions of new terrorists, to run up a bill that we will be paying off for generations, to take the lives of 4,000 Americans and Lord only knows how many Iraqis.

So yes, we should at the very least learn from this, commit it to communal memory, so that maybe next time a fear-mongering leader tries to stampede us into precipitate and unwise action, we will have the guts to stop and reason and own what we know. And to realize that the electorate has a role to play in the life of a free nation and it is not a mindless cheerleader.

One can only hope. In the meantime, here we are, five years later. The electorate has largely moved on, more concerned about the price of gas than the price of war.

But the war grinds on. Indeed, it has ground the president’s approval rating down to the low 30s.