The Supreme Court will hear arguments today in the District of Columbia’s ban on handguns. That reminded me of a posting I did when the district court ruled on the case a little over a year ago.

A federal appeals court ruled yesterday that the District’s longtime ban on keeping handguns in homes is unconstitutional.

The 2 to 1 decision by an appellate panel outraged D.C. Mayor Adrian M. Fenty and other city leaders, who said that they will appeal and that gun-related crimes could rise if the ruling takes effect. The outcome elated opponents of strict gun controls because it knocked down one of the toughest laws in the country and vindicated their interpretation of the U.S. Constitution’s language on the right to bear arms.

The panel from the U.S. Court of Appeals for the D.C. Circuit became the nation’s first federal appeals court to overturn a gun-control law by declaring that the Second Amendment grants a person the right to possess firearms. One other circuit shares that viewpoint on individual rights, but others across the country say the protection that the Second Amendment offers relates to states being able to maintain a militia. Legal experts said the conflict could lead to the first Supreme Court review of the issue in nearly 70 years.

I think it is time we had a discussion about guns, gun control and the Second Amendment.

I don’t own a gun. I never have and I never will. It’s not that I’m anti-gun. I know how to use one; my father taught me when I was a kid, and I spent many happy (if not chilly) mornings in Erie Marsh during duck season, and I did very well at camp on the rifle range learning how to shoot a .22. I respect them, and I am impressed by the craftsmanship that goes into the manufacturing of some of the classic shotguns that my dad has collected over the years. But I’ve never felt the need to own one for any reason, including personal protection, and I don’t have a problem with the idea of registering guns or requiring a background check on ownership. We do the same for automobiles; why not for guns?

The answer to the last question is usually framed in a simple reply: The Second Amendment to the U.S. Constitution, which says, in its entirety:

A well regulated militia, being necessary to the security of a free state, the right of the people to keep and bear arms, shall not be infringed. 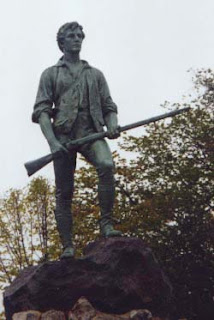 Aside from the fact that that isn’t even a grammatically correct sentence, the Second Amendment has ignited more passioned, if not crazed, debate than any other twenty-seven words since the first two lines of Genesis; also twenty-seven words. There are many people who believe in an absolute interpretation of the Second Amendment to the point that those seem to be the only words in the Constitution that they understand. They will not tolerate any interpretation that allows for the regulation or registration of any weapon, and anything less is unconstitutional. And despite the fact that the Amendment itself brings up two completely different subjects in one convoluted sentence — “a well regulated militia” and “the people” — the absolutists stick to their guns, and it is usually at this point when you get into a discussion with some of the more passionate defenders that they get this funny look in their eyes and you decide that it might be a good idea to change the subject: “Hey, how ’bout them Dodgers?” So bringing up the the idea that the Second Amendment is antiquated — it was written at a time when the country was mainly rural and guns were seen more as a hunting tool, not a weapon, and years before the establishment of a police force in the United States — is a non-starter with them. The interpretation of the term “militia” is usually seen as those patriotic citizen-soldiers who took up arms during the American Revolution. They are quaintly remembered as those guys marching with the fife and drum, striving for independence. (The British had another view of them, I’m sure, and today they’d be called “insurgents.”) But just as the section in the Constitution referring to slaves as “3/5 of a person” is outdated and has rightly been superseded, the Second Amendment needs to catch up with the times. The 18th century citizen militia has been replaced by layers of state-supported law enforcement and a Defense Department that costs more than anything else in the federal budget, and other than the guys who run around in the Michigan woods in Elmer Fudd hats and cammies and harbor fevered conspiracy theories about the Zionist Occupation Government in Washington and Area 51 in Nevada, the civilian militia has gone the way of the flintlock. It’s now the National Guard, and it is pretty well regulated.

So what does “well regulated” mean? Gun control advocates say that means that the government can, as the District of Columbia did, regulate ownership and mandate far-reaching controls as they did, since they apparently interpreted “militia” as meaning average citizens. The National Rifle Association, on the other hand, seizes upon the second part of the Amendment that says “the right to keep and bear arms shall not be infringed,” and the first part has nothing to do with the citizens. So the two parts of the Amendment seem to be in conflict, and there is the impasse.

Since it is unlikely that there will ever be an amendment to the Constitution that will change the Second Amendment, it might be a good idea to consider some reasonable interpretations of it with judicious constraints in place. Just as no one in their right mind would argue that the First Amendment, which enshrines freedom of the press, permits the unregulated distribution of child pornography, there could be limitations placed on the Second Amendment that reasonable people can agree on without damaging the Constitution. Just as you can’t yell “Fire!” in a crowded theatre, the average citizen shouldn’t be allowed to keep a howitzer in his garage, and even the most passionate of my deer-hunting friends in Michigan — the guys who live for the second week of November and dream of getting their twelve-point buck — don’t go to deer camp with a MAC-10. And just as it’s stupid and irresponsible to keep liquor in a house with children without keeping it under lock and key, the same applies to guns. I’m not saying the government should necessarily pass those kinds of laws; there are some things that common sense should provide for. However, if a teenager guzzles down a fifth of his dad’s Johnnie Walker and goes for a drive, the person who didn’t keep their booze under control is liable for the actions that result from that event, and if a child shoots his friend with his dad’s .45, there’s a level of responsibility there, too.

This shouldn’t be a liberal versus conservative argument. I know a lot of liberals who own guns and a lot of conservatives who think the NRA is a stooge of the far-right nutsery. Certainly there is a middle ground that is free of the visceral politics that guns bring out in people. (There’s a whole discussion on the peculiar passion some people have about guns, but that’s another post.) One friend suggested that if all the liberals who are in favor of gun control would pony up the membership fee and join the NRA, then they could take it over and turn the most feared right-wing lobby in Washington into an arm of the ACLU, which, by the way, has defended people on behalf of the Second Amendment. (I once gave an example of irony as using the NRA stickers in the back windows of pick-up trucks for .22 target practice.)

The other solution is to get away from the anecdotal and the Lifetime movie-of-the-week stories about Granny with a Glock defending her virtue and listen to the people who really know what it is to live and work with guns: police officers. Most of the cops that I know are all in favor of some form of sensible gun control. They have, shall we say, a vested interest in keeping guns out of the hands of people who shouldn’t have them. These are people who don’t see gun control as the first step down the slippery slope to fascism. (It’s interesting that in the wake of Oklahoma City and September 11, 2001, the law ‘n’ order crowd in the Congress was all in favor of government intrusion into everything such as phone taps, suspension of habeas corpus, seizure of explosives and internment of “enemy combatants,” but shied away from any additional forms of gun control. Is the Second Amendment that sacred that it stands free above and beyond the tampering that happened with the First, Fourth, Fifth, and Fourteenth Amendments, or are they that afraid of the NRA?) The men and women in law enforcement have as little patience for the wild-eyed gun nuts as they do for their polar opposites who call them “pigs,” and they should be the ones who should have the most influence in re-shaping the laws of this country and the Second Amendment to meet the needs and the responsibilities of the 21st Century.