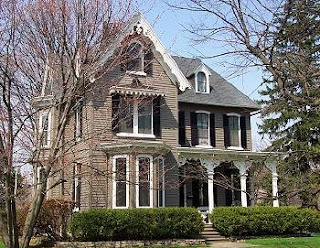 I grew up in Perrysburg, Ohio, but since I went off to college in 1971, I’ve moved around a lot, living in such diverse places as Colorado, New Mexico, Minnesota, Michigan, Indiana, California, and Florida. Other than Perrysburg, the longest I’ve lived in a city has been Miami; nearly ten years if you include my three years in college in the early 1970’s. But I think Perrysburg will always be home. That’s where my parents live, that’s where I made a lot of friends, and it’s a nice place to visit, with beautiful old homes, lots of trees and places for kids to play, good schools, nice people, a thriving business district, and even a great restaurant or two. It’s a nice place to be from.

PS: “Perrysburg is home to the Islamic Center of Greater Toledo. Established in the 1950s, the organization is the third mosque in America. The current structure, built over the period 1980-1983, is the first mosque in North America to use classic Islamic architecture.”