My brother spent a few days on the road last week and stayed at five Holiday Inn Expresses along the way: in Winnemuca and Fallon, Nevada; Delano and Williams, California; and Salem, Oregon. He noticed something similar at each of the five hotels. No, it wasn’t the fluffy pillows or the free high-speed internet. In the dining room where they served the complimentary breakfast, there was a wide-screened TV. And guess what news channel each TV in each hotel was tuned to. 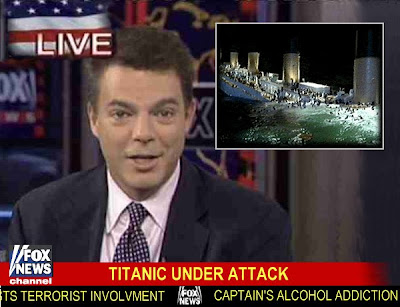 Yep, you guessed it. FOX.

I asked at the desk, and [the desk clerk] said “no, it’s not required, people just like to see the news.” I said, “why not some other news, like CNN, MSNBC, or a network morning show?” She looked at me like I was crazy — to her, Fox IS what people mean when they say “news.” She was speechless. Ugh…

I’ve had similar experiences in my own travels; in hotels with more than one TV in the breakfast room, at least one or two is tuned to FOX while the other is showing the Weather Channel or Good Morning, Tucumcari! Usually the sound is turned down and few, if any, of the diners are paying attention to the TV, but I wonder if the desk clerk is right; this is what passes for a comprehensive news source to the average American… or Dick Cheney. If so, we’re in trouble.

I also wonder if FOX counts these televisions playing to the backs of people eating toaster-thawed frozen waffles in a Holiday Inn Express in Dead Cat, Utah, or sitting in a waiting room at a Tire Kingdom store in Coral Gables in their ratings to bolster their claim of being the most-watched cable news channel. That wouldn’t surprise me, either.