Barack Obama won the Mississippi primary last night, which gives him a bit of boost on top of the win in Wyoming last weekend, and now we have six weeks to go before the Pennsylvania primary. So maybe it’s time for everyone to take some time off and join the college kids in South Padre, Daytona, Fort Lauderdale, and Key West and forget about all this silliness for a while. 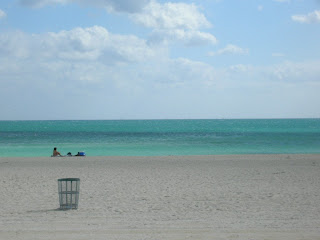 C’mon, Barack; we already know you look hot in a swim suit, so there’s no reason you and Michelle and the girls can’t get out there and have a little fun on the beach. C’mon, Hillary; relax a little. It’s too early for Cedar Point, but Orlando is always ready for a family fun adventure at Disney World. Okay, so it’s not a village. But the biggest favor both of you can do is give your staff and surrogates some time off and tell them to basically shut up.

We’re not even halfway through March and already the silliness is running rampant. Both campaigns have had high-placed surrogates shoot off their mouths and say stupid things: last week it was Samantha Powers for the Obama camp; this week it’s Geraldine Ferraro for the Clintons. (And not to miss out on the fun, the Republicans are still going over the top with Rep. Steve King (R-IA) standing by his stupidity about terrorists celebrating because of Barack Obama’s middle name.) And there is certain to be more to come, just as annoying and prolific as the dandelions that pop up on a spring lawn.

Now the campaigns are trying to define just what makes a “winner” as each side tries to woo the delegates and parse the difference between delegates, pledged delegates, caucus delegates, delegates who chew Trident… and it goes on and on to the point where you just wonder if maybe the Canadians or the British aren’t on to a good thing after all when they could have a complete election cycle and get a new prime minister and cabinet seated and have their first scandal in the time between now and April 22, when Pennsylvania votes.

Perhaps it’s because I spend a lot of time paying attention to all of this noise that I have reached my silliness saturation point. I hope that the rest of the country isn’t watching every move and listening for every nuance to a statement or a non-apology apology that comes out of each campaign, and I hope that the electorate has either tuned it out now because they’ve already had their primary and have gone back to worrying about things that matter like the price of gasoline or where they’re going to get the money to pay for their health care, or they haven’t yet had their primary and are avoiding paying attention to this until they absolutely have to. It’s only those of us who are following the circus from town to town, some with their noses buried deep in the tracking polls and the inside numbers, looking for a shift of a percentage point here and there in a bellwether precinct that might be the precursor to the butterfly effect that signals a fault line in a candidate’s message; or who stand back and watch this whole spectacle, shaking our heads in wonder at how silly and stupid it must look to the rest of the world: is this really how the most powerful nation on earth chooses its leader? Let’s hope nobody else notices.

C.J. Cregg, the fictional White House press secretary on The West Wing, once said that everyone’s stupid during an election year. Her colleague, Charlie Young, countered that the press treats everyone like they’re stupid during an election year. He’s right, but that’s because we give them every reason to think we are. Maybe if everyone just took some time off, went to the beach or to the mountains or just the back porch; to wherever we need to to get away from it all for a while… for good or ill the world will still be here when we come back. And we could put it all in perspective: six months from now nobody will remember what someone in the Obama campaign said about the Clintons and vice versa back after the Ohio primary — or was it Texas — and six months from now we’ll all be amazed at the trivial crap the Republicans have managed to throw at everybody because that’s all they’ve got as John McCain runs for George W. Bush’s third term.

Which way to the beach?