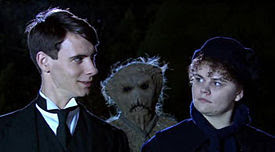 “What does it take to be the most liberal member of the United States Senate – farther left than Ted Kennedy, John Kerry or even Hillary Clinton? For the answer, take a look at a man who could be the next president of the United States: Barack Obama.

Sen. Obama was recently named the most liberal U.S. Senator, based on the annual voting analysis by the non-partisan and highly respected National Journal. If he emerges as the Democratic nominee, one of the critical jobs of Focus Action will be to uncover the real Barack Obama—not the feel-good orator who speaks of “change” and “hope,” but the man who would be the most left-wing president in our nation’s history.

Throughout our history, great Americans have stood up to grave challenges of all sorts. As this latest wave of secular liberalism threatens us, I look forward to standing shoulder to shoulder with you in prayer and action – in defense of the family,” – James Dobson, in his latest email. [Emphasis mine.]

So Dr. Dobson isn’t just reaching out to the evangelical Christian base anymore; he’s going for the Dr. Who fan base as well. How extraordinary.