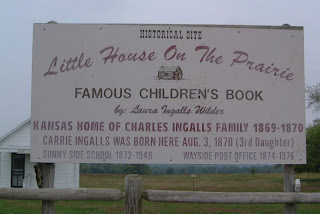 Welcome to Independence, Kansas — not to be confused with Independence, Missouri, which is a suburb of Kansas City, a couple of hundred miles from here. Independence is about 75 miles north of Tulsa, Oklahoma, and about five or six miles north of the site of the Little House on the Prairie — the real one that the Ingalls family lived in, not the set for the TV series.

This is a nice town. It reminds me of the town I grew up in, and in the seventeen years that I’ve been coming here, I’ve gotten to know a lot of people who live here, and they remind me of the people I grew up with, too.

And yet for all its small-town feel, it is still a town in the 21st century. The Apple Tree Inn has free high-speed internet and HD TV in the rooms — something I didn’t get when I was in New York last January — and they know what’s going on in the world as well as the people in Miami do. Maybe even more. Gas is $3.30 a gallon here, too, and I saw more than one Obama 08 or Hillary stickers as I drove up from Tulsa this afternoon. Perhaps Kansas is figuring out exactly what was the matter.

Another nice thing about coming back to a place year after year is that people you only see for a short time remember you. When I stopped to pick up my rental car from Hertz at the Tulsa airport, the lady behind the counter remembered me and remembered that the last two times I’d rented from them, I’d asked for a Mustang. When I approached the counter she smiled and said, “I’ve got one left, and it’s waiting for you.”

It’s good to be home.