Here’s some non-Inge Festival items in the news:

– The “I Believe” license plate is making its way through the Florida state legislature, which has led to suggestions for other plates. 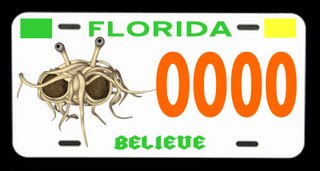 – John McCain bashes Bush over Katrina recovery. That led, of course, to questions whether or not he believes, as his endorser John Hagee does, that the storm was divine retaliation for New Orleans being gay-friendly.

– As expected, the Republicans are gearing up to smear the Democratic nominee, whoever that might be. To do that, they’re bringing back one of their slimiest operatives, Floyd (“Willie Horton”) Brown.

– Antonin Scalia to people who are still upset about Gore vs. Bush: get over it! As Petulant notes, we will as soon as the righties “get over” Roe vs. Wade.