The Florida Senate, faced with a massive budget crunch that will bleed the public schools dry, took up a really important issue yesterday. 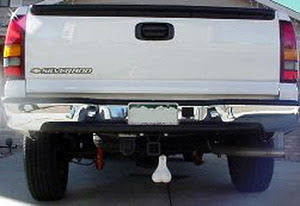 Drivers who want their trucks to have that virile look dodged a bullet in the Legislature Wednesday.

State senators talked over the pressing issue of ”truck nutz” after Sen. Carey Baker, a Eustis Republican, proposed a $60 fine for vehicles that have the popular anatomical figures on display. The proposal was an amendment to a larger bill dealing with transportation issues.

The measure met with resistance from Sen. Jim King, a Jacksonville Republican, who called them ”a statement of truckyness”.

Sen. Evelyn Lynn also objected to the bill. ”This seems to be a morality ticket. It doesn’t seem germane.”

After a 20-minute discussion, the ”truck nutz” measure was bagged.

I have an idea. The next time the Florida Senate decides to waste their time and our money fretting over something like this, we take up a collection, buy up a bunch of these nutz, and send them to them as a symbolic reminder of what we’ll do to the senators at the voting booth if they don’t get back to work.