The righties are still bringing up the name of William Ayers, the aging remnant of the Weather Underground (who also happens to be a Distinguished Professor of Education at the University of Chicago) who lives in Sen. Obama’s neighborhood and with whom he has a nodding acquaintance. The way they go after them, you’d think that anyone who ever shook the hand of Barack Obama and then scratched their ass during the playing of the national anthem called the patriotism of the candidate into question, and they’re making a huge deal out of these nebulous connections. But wouldn’t it be ironic if it turns out that John McCain had just such an unrepentant radical backing him? 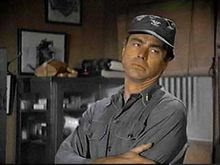 Can a presidential candidate justify a long and friendly relationship with someone who, back in the 1970s, extolled violence and committed crimes in the name of a radical ideology—and who has never shown remorse or admitted error? When the candidate in question is Barack Obama, John McCain says no.

But when the candidate in question is John McCain, he’s not so sure.

Obama has been justly criticized for his ties to former Weather Underground member Bill Ayers, who in 1995 hosted a campaign event for Obama and in 2001 gave him a $200 contribution. The two have also served together on the board of a foundation. When their connection became known, McCain minced no words: “I think not only a repudiation but an apology for ever having anything to do with an unrepentant terrorist is due the American people.”

What McCain didn’t mention is that he has his own Bill Ayers—in the form of G. Gordon Liddy. Now a conservative radio talk-show host, Liddy spent more than 4 years in prison for his role in the 1972 Watergate burglary. That was just one element of what Liddy did, and proposed to do, in a secret White House effort to subvert the Constitution. Far from repudiating him, McCain has embraced him.

How close are McCain and Liddy? At least as close as Obama and Ayers appear to be. In 1998, Liddy’s home was the site of a McCain fundraiser. Over the years, he has made at least four contributions totaling $5,000 to the senator’s campaigns—including $1,000 this year.

Last November, McCain went on his radio show. Liddy greeted him as “an old friend,” and McCain sounded like one. “I’m proud of you, I’m proud of your family,” he gushed. “It’s always a pleasure for me to come on your program, Gordon, and congratulations on your continued success and adherence to the principles and philosophies that keep our nation great.”

Which principles would those be? The ones that told Liddy it was fine to break into the office of the Democratic National Committee to plant bugs and photograph documents? The ones that made him propose to kidnap anti-war activists so they couldn’t disrupt the 1972 Republican National Convention? The ones that inspired him to plan the murder (never carried out) of an unfriendly newspaper columnist?

Given Liddy’s record, it’s hard to see why McCain would touch him with a 10-foot pole. On the contrary, he should be returning his donations and shunning his show. Yet the senator shows no qualms about associating with Liddy—or celebrating his service to their common cause.

How does McCain explain his howling hypocrisy on the subject? He doesn’t. I made repeated inquiries to his campaign aides, which they refused to acknowledge, much less answer. On this topic, the pilot of the Straight Talk Express would rather stay parked in the garage.

That’s an odd policy for someone who is so forthright about his rival’s responsibility. McCain thinks Obama should apologize for associating with a criminal extremist. To which Obama might reply: After you.

Actually, the comparison between G. Gordon Liddy and William Ayers is a little unfair because while Mr. Ayers has spent the last few decades in relative obscurity, Mr. Liddy has devoted himself to becoming a right-wing radio talk show host and the epitome of buffoonery, a real-life Colonel Flagg, (pictured above, played by the late Edward Winter) the gung-holier-than-thou CIA spook from M*A*S*H who saw a commie under every bunk. Except compared to Liddy, Col. Flagg had wit, charm and humor.