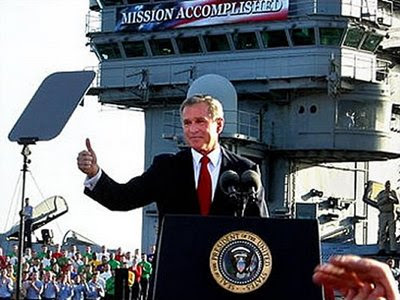 Major combat operations in Iraq have ended. In the Battle of Iraq, the United States and our allies have prevailed. – George W. Bush
White House Press Secretary Dana Perino gets annoyed that we remind her every year about this propaganda stunt. What Mr. Bush actually meant to say was “Mission Accomplished For These Sailors Who Are On This Ship On Their Mission.”

She went on to explain that yes, the president should have been more specific and she knows that the media will play this up “as they do every single year.”

So the 4,000 plus soldiers who have died since then did it just to prove you wrong and piss you off, Dana?