– The dreaded FCAT gets some changes.

For Florida’s public school students, a minor revolution may soon be coming in the classroom.

The dreaded FCAT could be moved to later in the year to give children more time to learn the subjects they are tested on.

And the exam’s emphasis would be downgraded when it comes to calculating the grades given to the state’s high schools, accounting in the future for only 50 percent of their A to F rating, with the remainder based on the graduation rate and other scholastic measures.

That’s the upshot of the first major revamp of public education in nearly a decade approved Friday by the Florida Legislature, which also decided that the state must be more specific in what children are expected to learn at each grade level.

– Battle of the Network Talking Heads: Tim Russert and George Stephanopolous have competing interviews tomorrow between Barack Obama and Hillary Clinton. TiVo one or the other if you care.

– The life of a gay Episcopal bishop.

He wore a bulletproof vest under his vestments for his consecration. He loves the Bible and considers scriptures to be holy and inspired – but not inerrant. Next month, he says, he is looking forward to becoming a “June bride.”

These are among the insights shared by Bishop V. Gene Robinson in his new book, In the Eye of the Storm: Swept to the Center by God (Seabury Books, $22).

The title is fitting for the man whose June, 2003, election and consecration as the first openly gay and noncelibate bishop in the Episcopal Church sparked a worldwide uproar that continues to reverberate five years later.

– Yet another elected official admits to an extramarital affair. This time it’s a Democrat.

– Rent before you buy. I got to test drive a new Mustang last week thanks to Hertz. 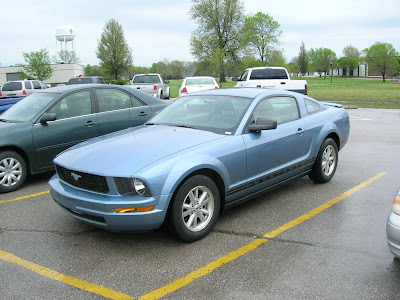 It had Sirius satellite radio, which I have decided I want in my next car.