– It’s Not What You Thought It Would Be: Frank Rich says that the rest of the campaign won’t be like any other one we’ve seen.

This is not 1968, when the country was so divided over race and war that cities and campuses exploded in violence. If you have any doubts, just look (to take a recent example) at the restrained response by New Yorkers, protestors included, to the acquittal of three police officers in the 50-bullet shooting death of an unarmed black man, Sean Bell.

This is not 1988, when a Democratic liberal from Massachusetts of modest political skills could be easily clobbered by racist ads and an incumbent vice president running for the Gipper’s third term. This is not the 1998 midterms, when the Teflon Clintons triumphed over impeachment. This is not 2004, when another Democrat from Massachusetts did for windsurfing what the previous model did for tanks.

Almost every wrong prediction about this election cycle has come from those trying to force the round peg of this year’s campaign into the square holes of past political wars. That’s why race keeps being portrayed as dooming Mr. Obama — surely Jeremiah Wright = Willie Horton! — no matter what the voters say to the contrary. It’s why the Beltway took on faith the Clinton machine’s strategic, organization and fund-raising invincibility. It’s why some prognosticators still imagine that John McCain can spin the Iraq fiasco to his political advantage as Richard Nixon miraculously did Vietnam.

The year 2008 is far more complex — and exhilarating — than the old templates would have us believe. Of course we’re in pain. More voters think the country is on the wrong track (81 percent) than at any time in the history of New York Times/CBS News polling on that question. George W. Bush is the most unpopular president that any living American has known.

And yet, paradoxically, there is a heartening undertow: we know the page will turn. For all the anger and angst over the war and the economy, for all the campaign’s acrimony, the anticipation of ending the Bush era is palpable, countering the defeatist mood. The repressed sliver of joy beneath the national gloom can be seen in the record registration numbers of new voters and the over-the-top turnout in Democratic primaries.

Mr. Obama hardly created this moment, with its potent brew of Bush loathing and sweeping generational change. He simply had the vision to tap into it. Running in 2008 rather than waiting four more years was the single smartest political decision he’s made (and, yes, he’s made dumb ones too). The second smartest was to understand and emphasize that subterranean, nearly universal anticipation of change rather than settle for the narrower band of partisan, dyspeptic Bush-bashing. We don’t know yet if he’s the man who can make the moment — and won’t know unless he gets to the White House — but there’s no question that the moment has helped make the man.

– From Endangered to Annoying: A bird that was once on the endangered species list has become a pest. 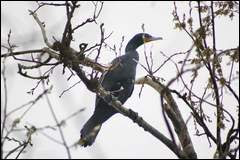 They might be confused with dark-colored birds called double-crested cormorants.

Right or wrong, no Great Lakes bird seems to have moved so quickly from victim to villain in the public’s eye.

Pushed to the brink of extinction a generation ago, the double-crested cormorant – one of 38 types of cormorants worldwide and six in North America – now wreaks havoc on small, uninhabited islands in western Lake Erie.

At least that’s how many Great Lakes wildlife managers and sportsmen view them.

To animal rights activists, though, the birds have been shamelessly persecuted by humans for several decades because of their smell and the unsightly messes they have left behind – and to placate those who believe they’re a threat to the fishing industry.

Like the bald eagle, the double-crested cormorant was a symbol of poisoning by DDT and other chemicals associated with the post-World War II industrial boom.

Not any longer. It has bounced back in such numbers that biologists and sportsmen now view it as a scourge that needs to be thinned out.

Some managed hunts – “culls” – by sharpshooters have been conducted during the last two years on the American side of Lake Erie, at West Sister Island, Green Island, and Turning Point Island.

Additional culls have been staged along other Great Lakes, on both sides of the border.

West Sister is in an isolated part of the lake between Toledo and Catawba Island, some nine miles north of Jerusalem Township. It is a wildlife sanctuary the federal government owns, home of the most important colonial wading bird colonies on the Great Lakes. Those include great blue herons and black-crowned night herons, as well as great, snowy, and cattle egrets.

Green and Turning Point islands, both to the east, are managed by the Ohio Department of Natural Resources. Each has restricted access.

On May 1, Canada responded to culls on the U.S. side of Lake Erie by sending its own sharpshooters to Middle Island, which is south of Pelee Island and is Canada’s southernmost strip of land. It previously had culled birds from Presqu’ile Provincial Park in eastern Ontario, on the northern side of Lake Ontario.

Middle Island is now off-limits to visitors until Sept. 1. Attention is soon expected to shift to another Canadian island in Lake Erie that has been devastated ecologically, East Sister Island.

– Big Rigs: In some places, like New Mexico, high gas prices are the price you pay for keeping your troca.

There’s been a lot of press about the plummeting sales of big pickups as the price of gas continues its inexorable climb toward $4 a gallon. In fact, sales of full-size pickups fell by only 66,035 units in 2007 over the year before, with Americans buying 2,137,689 big pickups, compared to 2,271,277 four-door family sedans, according to Automotive News.

More than 2 million people last year chose to take on the challenge of their own private subprime crises every time they have to pop for a $100 fill-up at the local gas station. We are truly living in the land of the brave. It’ll be interesting to see what the numbers hold for 2008 as it rolls along.

What’s the allure of these monsters? There’s a Cold War mentality that’s got to motivate a lot of these the purchases. Remember: When the Russians had 3,000 missiles, we needed 6,000 to feel safe. Today, sharing the road with 3,000-pound cars that could suddenly hurtle out of control has plenty of drivers buying 6,000-pound trucks for defense.

Then there is the actual utility of the vehicles. If you need to pick up a pallet of pumice block after dropping the kids off at school, nothing beats a four-door pickup. Tow a boat to Abiquiú Lake, a trailer to Texas or some horses up into the Sangres with the family in the backseat? A crew cab is perfect for this kind of work.

There’s a real sense of security in the high seating position, which also provides the best view on the road. These big trucks are stout and will take abuse for years and years.

Given the high costs of trucks’ all-American symbolism and their ambiguous utility as daily drivers, it’s a good thing that you can’t go wrong with whatever big pickup you buy. I drove the five contenders and found them to all provide amazingly similar driving experiences, with neither a standout performer nor a dog in the group.

It’s well known that automobile companies purchase competing vehicles and tear them apart as they design their own models, making sure they are not missing any feature or critical competitive characteristic. Reverse engineering it’s called, and it’s obvious in the similarities of these trucks that it’s become a high art.

Big pickups are uniformly good machines for what they are. These days, it’s definitely a situation of buying what you think you’ll look good in, or what your daddy drove, because you can’t go wrong with the overall package of any of them.

Like SUV’s are here in Miami, a big truck in New Mexico is a status symbol. Also, knowing what the roads are like in some parts of the Land of Enchantment, the big peek-up is a necessity. There’s a saying out there: “You’ve gotta be awfully rich to live on a road that bad.”

– Doonesbury: Hang on or hang up.