– Defining Moments: How the Republicans, who have nothing but eight years of incompetence, war, fear-mongering, and any other number of reasons to prove that they shouldn’t be entrusted with the key to the men’s room at a party store off I-75, plan to win the election. 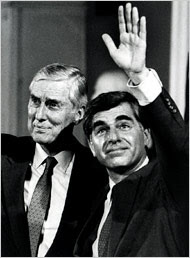 Sometimes, as Senator Barack Obama seemed to argue earlier this year, a flag pin is just a flag pin.

But it can never be that simple for anyone with direct experience of the 1988 presidential campaign. That year, the Republicans used the symbols of nationhood (notably, whether schoolchildren should be required to recite the Pledge of Allegiance) to bludgeon the Democrats, challenge their patriotism and utterly redefine their nominee, Gov. Michael S. Dukakis of Massachusetts.

The memory of that campaign — reinforced, for many, by the attacks on Senator John Kerry’s Vietnam war record in the 2004 election — haunts Democrats of a certain generation.

The 1988 campaign was, in many ways, the crucible that helped create Bill Clinton’s centrist philosophy and his fierce commitment to attack and counterattack, which drove the politics of the 1990s.

Mr. Obama, of Illinois, has promised a different politics, one that rises above the fray and the distractions of wedge issues. As Glenn Greenwald, a columnist for Salon, recently put it, “The entire Obama campaign is predicated on the belief that it is no longer 1988.”

But is that true?

The assertion looks more debatable in recent weeks, after the furor over Mr. Obama’s former pastor and his inflammatory views on America, the biggest of a series of “distractions” that have knocked the Obama campaign off stride. And if he wins the nomination, such issues will almost certainly rise again, given that he will run against a war hero, in Senator John McCain of Arizona, who is advised by several veterans of the campaign against Mr. Kerry.

Mr. Obama himself seemed chastened by the re-emergence of the old politics last week. “Let’s be honest,” he said in an interview on NBC. “You know, here I am, an African-American named Barack Obama who’s running for president. I mean, that’s a leap for folks. And I think it’s understandable that my political opponents would say, ‘You know, he’s different. He’s odd. He’s sort of unfamiliar. And what do we know about him?’ ”

There is a subtext for this history lesson: Mr. Obama’s rival for the Democratic nomination, Senator Hillary Rodham Clinton of New York, is running hard on the notion that she is the more electable candidate, that what she calls her “baggage” has been thoroughly vetted, and that she has survived 16 years of the harshest Republican attacks.

But David Axelrod, chief strategist to Mr. Obama, argues that any Democratic nominee will be subject to the same withering attacks on values and character.

“The question,” Mr. Axelrod said, “is whether given the abysmal state of our economy, given the war, given all the challenges that people sense we face that have led George Bush to have the lowest rating ever, do you believe that voters are going to be distracted from the fundamental need for change? I think the answer to that is no.”

The solution to the Democrats’ problem is very simple. Every time the Republicans come up with one of these outrageous canards, we call them on it.

The hard part about that is that the media is easily distracted by little shiny things like flag pins and bowling scores and coffee makers. They have their need to fill 24/7, so they have to find something; in non-election years its vanishing white women and the image of Jesus Christ appearing in a grilled cheese sandwich. There probably isn’t a lot we can do about it, but at the very least we can label it for what it is: a carnival attraction rather than a legitimate news item. And wittingly or not, the focus on the petty plays into the Republicans’ defensive offensive. The longer we are distracted, the less they have to worry about things like the economy, education, inflation, recession; you know, the things that really matter. And as long as they can bluster and sputter about one man’s patriotism or one woman’s callousness and have willing dupes in the news business to lap it up, the less they have to say about John McCain, and the less they have to prove that he isn’t just another George W. Bush. The only way the Republicans can win this election is if they don’t run on their own record. The worst thing that can happen to John McCain and the GOP is if we hold them up to the same standards they use for everybody else.

Bored by those endless replays of the Rev. Jeremiah Wright? If so, go directly to YouTube, search for “John Hagee Roman Church Hitler,” and be recharged by a fresh jolt of clerical jive.

None of this is to say that two wacky white preachers make a Wright right. It is entirely fair for any voter to weigh Mr. Obama’s long relationship with his pastor in assessing his fitness for office. It is also fair to weigh Mr. Obama’s judgment in handling this personal and political crisis as it has repeatedly boiled over. But whatever that verdict, it is disingenuous to pretend that there isn’t a double standard operating here. If we’re to judge black candidates on their most controversial associates — and how quickly, sternly and completely they disown them — we must judge white politicians by the same yardstick.

The Republicans are counting on the Democrats’ heretofore inability to fight back…except between each other.

– Off or Off-Off? What makes a show an off-Broadway production versus off-off Broadway? Aspiring playwrights want to know.

CASUAL theatergoers may have little or no idea of the difference between Off Broadway and Off Off Broadway. So here’s a quick primer.

If you are paying $65 or $75 for a full-price ticket, you are seeing an Off Broadway show. If you are fanning yourself with your program and wondering about fire-code violations, it’s definitely a double-Off experience.

Engulfed by the sound of uncrinkling candy wrappers: Off. Surrounded by tattoos and Obama buttons: Off Off.

There often seems to be little overlap — in either aesthetics or audiences — between these large categories of New York theater. The major Off Broadway companies have thousands of subscribers in the general vicinity of middle age, reasonably ample resources and a site to call their own. They specialize in straightforward narrative theater. The world of Off Off Broadway is a welter of scrappy companies fighting for attention, producing when and where they can, and forsaking linear storytelling and text-based work in favor of productions that mix mediums more freely. The cultural and financial divide between these two classes of theater often seems to outstrip the gap between Broadway and Off Broadway.

Some Off Off artists and troupes (the Richards Foreman and Maxwell, Les Freres Corbusier) have devoted followings. Some spaces (Performance Space 122, Here Arts Center) have established aesthetic identities and a core audience. But in general the wilderness of unruly and unknown troupes is a place where many regular theatergoers fear to tread, out of sheer bewilderment. Even if you pay close attention, it can be hard to separate the wheat from the chaff, and by the time word trickles out about an interesting new play, its brief run may be over.

This spring the barrier between these two worlds seems to be becoming more porous, with forward-thinking Off Broadway companies increasingly acting like curators of the woolly Off Off Broadway scene, using their resources to bring attention to worthy work that might otherwise be limited to small audiences. These ad-hoc collaborations are healthy for everybody, exposing new voices to new audiences, freshening the bloodstream at some of the city’s established Off Broadway companies and providing the luxury of ample resources for artists used to scraping by.

– Holy Water: Selling faith and salvation one bottle at a time in Miami.

The 11 bottles in the company’s collection bear prayers and impressively detailed images of Jesus Christ, St. Michael and the Virgin Mary. Spiritual Water joins a broad slice of feel-good products — Testamint, Bible Gum and other bottled holy waters — emerging at the intersection of religion and commerce, entrepreneurship and pop culture.

”There is a great history of people using religious images to sell products,” says Daniel Sack, an administrator at the University of Chicago Divinity School and author of Whitebread Protestants: Food and Religion in American Culture. ”You are talking about combining the great American traditions of religion and consumption.”

Last fall, Elicko Taieb launched Spiritual Water as a way to inspire Protestants and Catholics. The water, purified from a municipal source in Santa Ana, Calif., is not available in stores, but Taieb says independent distributors sell about 2,000 to 3,000 cases a month.

”Church is on Sundays, but people need something to help them through the week,” says Taieb, 33 and CEO of the company.

”The whole idea is for people to feel better and to know God is with them,” he says.

Spiritual Water’s message is delivered in a 16.9-ounce plastic bottle that sells for $2.

Whatever gets you through the night.