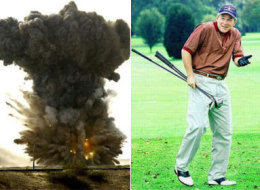 As violence in Iraq continues — clashes today left 11 dead and 19 injured — President Bush has for the first time revealed the great sacrifice he’s made for the sake of our soldiers: he’s given up golf.

From an interview with Politico and Yahoo News:

“I don’t want some mom whose son may have recently died to see the commander in chief playing golf,” he said. “I feel I owe it to the families to be in solidarity as best as I can with them. And I think playing golf during a war just sends the wrong signal.”

How noble can you get? I’m sure all the families who have lost their fathers and sons, mothers and daughters, wives and husbands, get down on their knees and thank the president for his sacrifice.