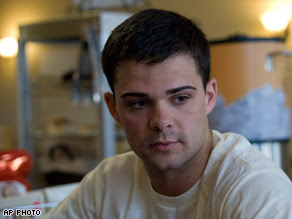 Like hundreds of young men joining the Army in recent years, Jeremy Hall professes a desire to serve his country while it fights terrorism.

But the short and soft-spoken specialist is at the center of a legal controversy. He has filed a lawsuit alleging that he’s been harassed and his constitutional rights have been violated because he doesn’t believe in God. The suit names Defense Secretary Robert Gates.

Known as “the atheist guy,” Hall has been called immoral, a devil worshipper and — just as severe to some soldiers — gay, none of which, he says, is true. Hall even drove fellow soldiers to church in Iraq and paused while they prayed before meals.

“I see a name and rank and United States flag on their shoulder. That’s what I believe everyone else should see,” he said.

Hall, 23, was raised in a Protestant family in North Carolina and dropped out of school. It wasn’t until he joined the Army that he began questioning religion, eventually deciding that he couldn’t follow any faith.

The issue came to a head when, according to Hall, a superior officer, Maj. Freddy J. Welborn, threatened to bring charges against him for trying to hold a meeting of atheists in Iraq. Welborn has denied Hall’s allegations.

Hall said he had had enough but feared that he wouldn’t get support from Welborn’s superiors. He turned to Mikey Weinstein and the Military Religious Freedom Foundation.

Weinstein is the foundation’s president and a U.S. Air Force Academy graduate. He had sued the Air Force for acts he said illegally imposed Christianity on students at the academy, though that case was dismissed. He calls Hall a hero.

“The average American doesn’t have enough intestinal fortitude to tell someone to shut up if they are talking in a movie theater,” Weinstein said. “You know how hard it is to take on your chain of command? This isn’t the shift manager at KFC.”