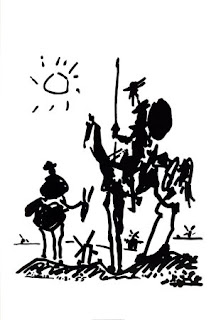 An Ohio Democratic lawmaker and former presidential candidate has presented articles of impeachment against President George W. Bush to Congress.

Thirty-five articles were presented by Rep. Dennis Kucinich to the House of Representatives late Monday evening, airing live on C-SPAN.

“The House is not in order,” said Kucinich to Speaker Nancy Pelosi (D-CA), upon which Pelosi pounded her gavel.

“Resolved,” Kucinich then began, “that President George W. Bush be impeached for high crimes and misdemeanors, and that the following articles of impeachment be exhibited to the United States Senate. …

The first article Kucinich presented, and many that followed, regarded the war in Iraq: “Article 1 – Creating a secret propaganda campaign to manufacture a false case for war against Iraq.”

I don’t give his efforts much of a chance, and I’m sure a lot of people, including the Democratic leadership, view him as a crackpot, but I have to give Mr. Kucinich props for sticking to his principles, and if a blow job is worthy of articles of impeachment, certainly starting a war is worthy as well. And sometimes there are windmills worth tilting at.