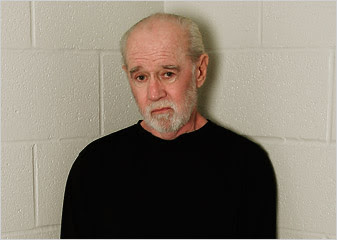 George Carlin, the Grammy-Award winning standup comedian and actor who was hailed for his irreverent social commentary, poignant observations of the absurdities of everyday life and language, and groundbreaking routines like “Seven Words You Can Never Say on Television,” died in Santa Monica, Calif., on Sunday, according to his publicist, Jeff Abraham. He was 71.

The cause of death was heart failure. Mr. Carlin, who had a history of heart problems, went into the hospital on Sunday afternoon after complaining of heart trouble. The comedian had worked last weekend at The Orleans in Las Vegas.

Recently, Mr. Carlin was named the recipient of the Mark Twain Prize for American Humor. He was to receive the award at the Kennedy Center in November. “In his lengthy career as a comedian, writer, and actor, George Carlin has not only made us laugh, but he makes us think,” said Stephen A. Schwarzman, the Kennedy Center chairman. “His influence on the next generation of comics has been far-reaching.”

Like most people my age — over 50 — George Carlin was the first comedian that really spoke to my generation. Rather than the one-liners about white-bread suburban life that made you chuckle on Ed Sullivan or at a Vegas show, George Carlin talked about things that we never thought we’d hear from a comic, and not just the drugs and dirty words. He got us. He knew what made us laugh, including the seven dirty words. And he set the stage for the comedians and observers that came after, and I don’t think it’s too much of a stretch to say that had it not been for George Carlin, a lot of the comedy we see today, including such things as topical comedy like the work of Jon Stewart, wouldn’t have happened as it did. In short, George Carlin was The Beatles of comedy.

Like all icons, he reached beyond the stage. He was an insightful commentator on life and unafraid to tell the truth regardless of who was offended. Whether he knew it or not (and I suspect he did), he used comedy the same way Shakespeare did with his comic characters inserted in the midst of his deepest tragedies. Like Lear’s Fool or Hamlet’s gravediggers, he did not polish or varnish the brutality of life, and in doing so, he made us laugh at ourselves and recognize the fools in all of us. That is truly a gift.