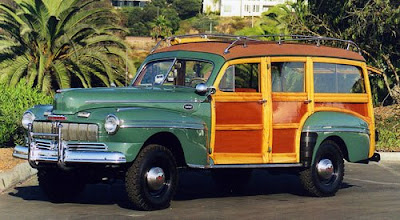 Motoring around Santa Monica with Dougger Anderson is like taking a drive with Angelina Jolie or George Clooney, except it’s the car, not the passengers, that has the celebrity status.

“Hey, how you doing?” chimes Anderson as he waves “hang loose” to a guy snapping a cellphone shot of the pristine maize-colored Ford Woody Wagon — one of the quintessential old-school “cheap” beach cars with wood paneling that were perfect for hauling surfboards and buddies — as it idles at a red light.

“What year is it?” hollers another fellow along Ocean Boulevard.

Despite the bumpy outing, the grind of the stick shift and the lack of power brakes and steering, the Woody ride is more than just a grown man showing off his expensive toy.

“It reminds me of what being in Southern California is all about,” says Anderson, who surfed his youth away at Dana Point. “It represents the carefree beach days, the smell of Coppertone, the Beach Boys. I bought it for the joy of the image it projects. It just makes everyone happy.”

They’re not fuel-efficient, the maintenance on the wood parts is time-consuming, and finding one in good condition is rare, but… they’re just fun, and beautiful in their own way. And if they didn’t become an archetype, why is it that you can still get cars built today with faux-bois paneling on the side?