Times may be tough in Baghdad, but one business sector is really getting huge… in more ways than one. 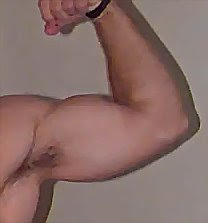 Younis Imad, 18, started lifting weights at the Future Gym along Baghdad’s Palestine Street a little over a year ago. “I was overweight,” he said, taking a break between sets. “I was very upset about that.” He was also in need of a job.

The gym’s entrepreneurial owner, Ali Torkey, took Imad under his wing, gave him dieting tips and put him on a whey protein regimen. Four months ago, newly buff after weeks of working out, Imad secured work as a security guard at a radio station in Baghdad, a city where improving security is reflected in the revival of everyday activities such as bodybuilding.

“I feel better when I come in and exercise,” said Imad, having arrived straight from the station to work out wearing jeans, a fitted red T-shirt and combat boots. He works out six times a week, and in the past year he has shed most of his body fat and grown a thick chest and huge biceps.

The advent of affordable gyms and the influx of muscle-building supplements, including many steroids illegal in the United States without a prescription, have turned bodybuilding, a longtime obsession for many Iraqis, into a booming industry.

It has to be seen as a sign of progress that Iraq is returning to some semblance of normal, and it’s good that the gyms are open to everyone instead of the connected, as it was in the Saddam Hussein era. Just kick the ‘roids, guys.