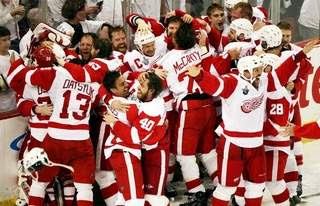 PITTSBURGH — One last bullet came flying at Chris Osgood. It had kill all over it. He stopped it with his glove, pushed it away with his stick, and as the blue light swirled to mark the end of the game, he was flat on the ice. But not for long. The Red Wings were coming home. The Stanley Cup was coming with them. As they say in fairy tales, “All’s Well That Ends Red.”

Welcome back to Hockeytown, Lord Stanley.