When you’re poor, it can be hard to pay the bills. When you’re rich, it’s hard to keep track of all the bills that need paying. It’s a lesson Cindy McCain learned the hard way when NEWSWEEK raised questions about an overdue property-tax bill on a La Jolla, Calif., property owned by a trust that she oversees. Mrs. McCain is a beer heiress with an estimated $100 million fortune and, along with her husband, she owns at least seven properties, including condos in California and Arizona.

San Diego County officials, it turns out, have been sending out tax notices on the La Jolla property, an oceanfront condo, for four years without receiving a response. County records show the bills, which were mailed to a Phoenix address associated with Mrs. McCain’s trust, were returned by the post office. According to a McCain campaign aide, who requested anonymity when discussing a private matter, an elderly aunt of Mrs. McCain’s lives in the condo, and the bank that manages the trust has not been receiving tax bills on the property. Shortly after NEWSWEEK inquired about the matter, the McCain aide e-mailed a receipt dated Friday, June 27, confirming payment by the trust to San Diego County in the amount of $6,744.42. County officials say the trust still owes an additional $1,742 for this year, an amount that is overdue and will go into default July 1. Told of the outstanding $1,742, the aide said: “The trust has paid all bills shown owing as of today and will pay all other bills due.”

Dan McAllister, treasurer- tax collector for San Diego County, said that about 3 percent of San Diego’s approximately 1 million property owners default on their property taxes each year. The county assesses a 1.5 percent penalty for each month that goes by unpaid and puts houses up for sale after five years. “We do hear an awful lot of excuses for why people don’t pay,” McAllister said. “Under the law, the property owner is responsible for keeping the address current. We’re only as good as the information we are given.”

Mr. McCain’s apologists will dismiss this as just a minor goof; after all, you can’t expect the McCains to know every little detail about their finances. Well, um, yeah, you should. (Wow, the property tax on an oceanfront condo in San Diego are only $1,742 a year? Compared to Florida, that’s chump change.) 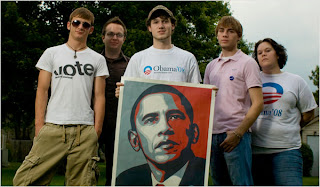 Emily Nordling has never met a Muslim, at least not to her knowledge. But this spring, Ms. Nordling, a 19-year-old student from Fort Thomas, Ky., gave herself a new middle name on Facebook.com, mimicking her boyfriend and shocking her father.

With her decision, she joined a growing band of supporters of Senator Barack Obama, the presumptive Democratic presidential nominee, who are expressing solidarity with him by informally adopting his middle name.

The result is a group of unlikely-sounding Husseins: Jewish and Catholic, Hispanic and Asian and Italian-American, from Jaime Hussein Alvarez of Washington, D.C., to Kelly Hussein Crowley of Norman, Okla., to Sarah Beth Hussein Frumkin of Chicago.

Jeff Strabone of Brooklyn now signs credit card receipts with his newly assumed middle name, while Dan O’Maley of Washington, D.C., jiggered his e-mail account so his name would appear as “D. Hussein O’Maley.” Alex Enderle made the switch online along with several other Obama volunteers from Columbus, Ohio, and now friends greet him that way in person, too.

Mr. Obama is a Christian, not a Muslim. Hussein is a family name inherited from a Kenyan father he barely knew, who was born a Muslim and died an atheist. But the name has become a political liability. Some critics on cable television talk shows dwell on it, while others, on blogs or in e-mail messages, use it to falsely assert that Mr. Obama is a Muslim or, more fantastically, a terrorist.

“I am sick of Republicans pronouncing Barack Obama’s name like it was some sort of cuss word,” Mr. Strabone wrote in a manifesto titled “We Are All Hussein” that he posted on his own blog and on dailykos.com.

So like the residents of Billings, Mont., who reacted to a series of anti-Semitic incidents in 1993 with a townwide display of menorahs in their front windows, these supporters are brandishing the name themselves.

The first person I saw use this tactic was Minstrel Boy at Harp and Sword, who knows something about adopting names.

– So Long, Southwyck: The Toledo Blade reports on the end of an era in retail shopping.

The deadline brings an end to the gradual decline in Southwyck businesses that gained speed last fall when the Y-shaped mall’s final anchor store, Dillard’s, closed in coordination with the opening of its new location in the Shops at Fallen Timbers in Maumee.

Southwyck, in its heyday, could boast 103 stores and three anchors, along with several dozen smaller shops in its “Old Towne” mini-mall wing that was modeled upon the marketplace of late 19th-century Boston.

Yet the decline and fall of a once formidable mall is nothing new or specific to Toledo.

Other 1970s-era shopping malls nationwide have had trouble competing in the contemporary retail climate, in which open-air, villagelike developments, such as Fallen Timbers and Perrysburg’s Town Center at Levis Commons, are a latest fashion.

And Southwyck is not the only Toledo-area mall that has taken a beating. The former North Towne Square mall, off Alexis and Telegraph roads near the Michigan border, shut its doors in 2005 after 24 years of retailing, and the Woodville Mall east of Toledo in Northwood is continuing to struggle and is seeking a new owner.

“I don’t want Toledoans to beat themselves up about it — it is a national trend,” said Michael Young, an urban planner in San Diego who was a Toledo city planner for 16 years. “There are entire Web sites about dead shopping malls.”

Starting in 1960, I went to school across the street from the land that became Southwyck. When I started, it was all tomato and bean fields and the school had to get water out of a well. By the time I graduated in 1971, Southwyck was the up-and-coming place to shop, and the traffic on Reynolds Road went from two lanes to the cancerous growth of strip malls and neon. Is it too much to hope that they’ll turn the land back to growing something other than another fast-food joint? (I also find it ironic that an entire part of a city can be born, live and die all within my lifetime.)

– Frank Rich: All you need is fear. 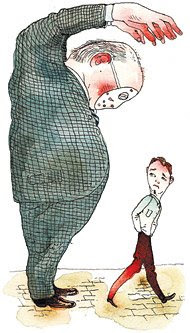 Unlike Hillary Clinton’s rumination about the Bobby Kennedy assassination or Barack Obama’s soliloquy about voters clinging to guns and faith, Mr. Black’s remarks were not an improvisational mishap. He gave his quotes on the record to Fortune magazine. He did so without thinking twice because he was merely saying what much of Washington believes. Terrorism is the one major issue where Mr. McCain soundly vanquishes his Democratic opponent in the polls. Since 2002, it’s been a Beltway axiom akin to E=mc2 that Bomb in American City=G.O.P. Landslide.

That equation was the creation of Karl Rove. Among the only durable legacies of the Bush presidency are the twin fears that Mr. Rove relentlessly pushed on his client’s behalf: fear of terrorism and fear of gays. But these pillars are disintegrating too. They’re propped up mainly by political operatives like Mr. Black and their journalistic camp followers — the last Washington insiders who are still in Mr. Rove’s sway and are still refighting the last political war.

That the old Rove mojo still commands any respect is rather amazing given how blindsided he was by 2006. Two weeks before that year’s midterms, he condescendingly lectured an NPR interviewer about how he devoured “68 polls a week” — not a mere 67, mind you — and predicted unequivocally that Election Day would yield “a Republican Senate and a Republican House.” These nights you can still find Mr. Rove hawking his numbers as he peddles similar G.O.P. happy talk to credulous bloviators at Fox News.

But let’s put ourselves in Mr. Black’s shoes and try out the Rove playbook at home — though not in front of the children — by thinking the unthinkable. If a terrorist bomb did detonate in an American city before Election Day, would that automatically be to the Republican ticket’s benefit?

Not necessarily. Some might instead ask why the Bush White House didn’t replace Michael Chertoff as secretary of homeland security after a House report condemned his bungling of Katrina. The man didn’t know what was happening in the New Orleans Convention Center even when it was broadcast on national television.

Next, voters might take a hard look at the antiterrorism warriors of the McCain campaign (and of a potential McCain administration). This is the band of advisers and surrogates that surfaced to attack Mr. Obama two weeks ago for being “naïve” and “delusional” and guilty of a “Sept. 10th mind-set” after he had the gall to agree with the Supreme Court decision on Gitmo detainees. The McCain team’s track record is hardly sterling. It might make America more vulnerable to terrorist attack, not less, were it in power.

If that doesn’t work, they can always go after the queers.

– Tigers Update: They beat the Rockies in the ninth to get to .500.