– Memories of a Dream: A retrospective on an idea that went nowhere. 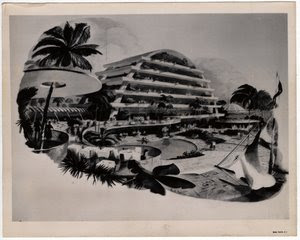 They called their dream Interama — a Disney World for South Florida, a futuristic theme park, a permanent, groundbreaking World’s Fair by the bay in North Miami.

From 1951 to 1975, Interama’s promise as a gateway for the Americas captured the imagination of local planners, famous architects, five U.S. presidents and one powerful cheerleader — iconic Claude Pepper, who represented Florida in Congress for decades.

Interama instead morphed into a massive boondoggle that drained millions in public money. At the end, all that materialized was cleared land prepped for construction.

Now the ups and downs of the famously failed project has become the newest exhibit at downtown Miami’s Historical Museum of Southern Florida.

”Interama — Miami and the Pan-American Dream” brings the project back to life 40 years after its first scheduled opening date: July 4, 1968.

The exhibit, which opened Saturday and runs through Jan. 25, was prompted by two University of Miami architectural professors’ unexpected discovery.

Allan Shulman and Jean-Francois Lejeune were researching a book at the Florida State Archives in Tallahassee, Shulman said, when they uncovered boxes of untouched Interama paperwork, photographs, models and plans, renderings, brochures, pamphlets and other memorabilia.

It was never more than a futuristic blueprint on an architect’s table, but chief curator of the museum Joanne Hyppolite believes that if Interma had been built, it would have been part of our collective memory — like going to the Miami Seaquarium or the zoo.

– Three in Ten: Americans come clean about their feelings about race in America.

As Sen. Barack Obama opens his campaign as the first African American on a major party presidential ticket, nearly half of all Americans say race relations in the country are in bad shape and three in 10 acknowledge feelings of racial prejudice, according to a new Washington Post-ABC News poll.

Lingering racial bias affects the public’s assessments of the Democrat from Illinois, but offsetting advantages and Sen. John McCain’s age could be bigger factors in determining the next occupant of the White House.

Overall, 51 percent call the current state of race relations “excellent” or “good,” about the same as said so five years ago. That is a relative thaw from more negative ratings in the 1990s, but the gap between whites and blacks on the issue is now the widest it has been in polls dating to early 1992.

More than six in 10 African Americans now rate race relations as “not so good” or “poor,” while 53 percent of whites hold more positive views. Opinions are also divided along racial lines, though less so, on whether blacks face discrimination. There is more similarity on feelings of personal racial prejudice: Thirty percent of whites and 34 percent of blacks admit such sentiments.

At the same time, there is an overwhelming public openness to the idea of electing an African American to the presidency. In a Post-ABC News poll last month, nearly nine in 10 whites said they would be comfortable with a black president. While fewer whites, about two-thirds, said they would be “entirely comfortable” with it, that was more than double the percentage of all adults who said they would be so at ease with someone entering office for the first time at age 72, which McCain (R-Ariz.) would do should he prevail in November.

Even so, just over half of whites in the new poll called Obama a “risky” choice for the White House, while two-thirds said McCain is a “safe” pick. Forty-three percent of whites said Obama has sufficient experience to serve effectively as president, and about two in 10 worry he would overrepresent the interests of African Americans.

Obama will be forced to confront these views as he seeks to broaden his appeal. He leads in the Post-ABC poll by six percentage points among all adults, but among those who are most likely to vote, the contest is a tossup, with McCain at 48 percent and Obama at 47 percent.

“I haven’t seen this much anger in a long, long time,” said Billy Roper, a 36-year-old who runs a group called White Revolution in Russellville, Ark. “Nothing has awakened normally complacent white Americans more than the prospect of America having an overtly nonwhite president.”

Such groups have historically inflated their influence for self-promotion and as an intimidation technique, and they refused to provide exact membership numbers or open their meetings to a reporter. Leaders acknowledged that their numbers remain very small — “the flat-globe society still has more people than us,” Roper said. But experts said their claims reveal more than hyperbole this time.

“The truth is, we’re finding an explosion in these kinds of hateful sentiments on the Net, and it’s a growing problem,” said Deborah Lauter, civil rights director for the Anti-Defamation League, which monitors hate group activity. “There are probably thousands of Web sites that do this now. I couldn’t even tell you how many are out there because it’s growing so fast.”

Neo-Nazi and white power groups acknowledge that they have little ability to derail Obama’s candidacy, so instead some have decided to take advantage of its potential. White-power leaders who once feared Obama’s campaign have come to regard it as a recruiting tool. The groups now portray his candidacy as a vehicle to disenfranchise whites and polarize America.”

“Overtly non-white”… how’s that for politically correct talk from Nazis…?

In America, the war has been a settled issue since early 2007. No matter what has happened in Iraq since then, no matter what anyone on any side of the Iraq debate has had to say about it, polls have consistently found that a majority of Americans judge the war a mistake and want out. For that majority, the war is over except for finalizing the withdrawal details. They’ve moved on without waiting for the results of Election Day 2008 or sampling the latest hectoring ad from moveon.org.

Perhaps if Americans had been asked for shared sacrifice at the war’s inception, including a draft, they would be in 1968-ish turmoil now. But they weren’t, and they aren’t. In 2008, the Vietnam analogy doesn’t hold. The center does.

The good news for Democrats — and the big opportunity for Barack Obama — is that John McCain and the war’s last cheerleaders don’t recognize that immutable reality. They’re so barricaded in their own Vietnam bunker that they think the country is too. It’s their constant and often shrill refrain that if only those peacenik McGovern Democrats and the “liberal media” acknowledged that violence is down in Iraq — as indeed it is, substantially — voters will want to press on to “victory” and not “surrender.” And therefore go for Mr. McCain.

To finesse this embarrassing record, Mr. McCain asks us to believe that the only judgment that matters is who was “right” about the surge, not who was right about our reckless plunge into war. That’s like saying he deserves credit for tossing life preservers to the survivors after encouraging the captain of the Titanic to plow full speed ahead into the iceberg.

But as Lara Logan asked, who’s paying attention to any of this Iraq stuff anyway? That Mr. McCain makes an unpopular and half-forgotten war the centerpiece of his campaign may simply be a default posture — the legacy of his Vietnam service and a recognition that any war, good or bad, is still a stronger suit for him than delving into the details of health care, education, tax policy or the mortgage crisis.

Even so, it leaves him trapped in a Catch-22. If violence continues to subside in Iraq — if, as Mr. McCain has it, we keep “winning” — it will only call more attention to the internal contradictions of a policy that says success in Iraq should be punished by forcing American troops to stay there indefinitely. And if Iraq reignites, well, so much for “winning.”

Not that the Obama policy is foolproof either. As everyone knows, there are no good options in Iraq. Our best hope for a bipartisan resolution of this disaster may be for a President Obama to appoint Mr. McCain as a special envoy to Baghdad, where he can stay for as long as he needs to administer our withdrawal or 100 years, whichever comes first.

– Tigers Update: They won 5-2 against the Padres in San Diego.