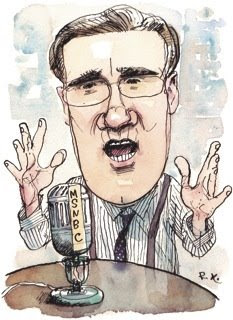 It was nearly midnight before Keith Olbermann left the NBC News election studio on May 13th, having spent five hours on the air, co-anchoring coverage of the West Virginia Democratic primary. Olbermann had a short ride home from Rockefeller Plaza to his condominium on the Upper East Side, and he was in bed by 2 A.M. But he lay wide awake, overcome by an urge to get up and move about. He has been given a diagnosis of Wittmaack-Ekbom’s syndrome, also known as “restless-legs syndrome” (and also “the kicks,” “Jimmy legs,” and “jitters”), a neurological disorder that produces a prickling, itching, or crawling feeling in the legs, profoundly disturbing sleep. Reclining exacerbates the condition, so Olbermann got out of bed, took a pill for the ailment, and, while waiting for the drug to kick in, scrolled through his BlackBerry, scanning recent messages. One arrested his attention. It was a link to the Web site Politico, which featured an interview conducted that day with President Bush. Olbermann was struck by two questions from the interview, and by Bush’s answers to them:

Q: Mr. President, turning to the biggest issue of all, Iraq. Various people and various candidates talk about pulling out next year. If we were to pull out of Iraq next year, what’s the worst that could happen, what’s the doomsday scenario?

BUSH: Doomsday scenario of course is that extremists throughout the Middle East would be emboldened, which would eventually lead to another attack on the United States. The biggest issue we face is—it’s bigger than Iraq—it’s this ideological struggle against cold-blooded killers who will kill people to achieve their political objectives. Iraq just happens to be a part of this global war….

Q: Mr. President, you haven’t been golfing in recent years. Is that related to Iraq?

BUSH: Yes, it really is. I don’t want some mom whose son may have recently died to see the Commander-in-Chief playing golf. I feel I owe it to the families to be as—to be in solidarity as best as I can with them. And I think playing golf during a war just sends the wrong signal.

Olbermann suddenly had another sensation, unrelated to neurology—a feeling, he later recalled, that was “like being hit by lightning.” He sat down at his computer and began to write. After an hour, he had the first draft of a lacerating indictment of Bush, a twelve-minute-long (eighteen pages in teleprompter script) j’accuse, addressed personally to the President.

“Mr. Bush, at long last, has it not dawned on you that the America you have now created includes ‘cold-blooded killers who will kill people to achieve their political objectives’?” Olbermann wrote. “They are those in—or formerly in—your employ, who may yet be charged some day with war crimes.”

The denunciation hit the high notes of the most fevered antiwar rhetoric, accusing Bush (he of the “addled brain”), his alleged puppet master (“the American snake-oil salesman Dick Cheney”), and the “tragically know-it-all minions,” “sycophants,” and “mental dwarves” who serve them in the Administration of perpetrating a “panoramic and murderous deceit” on America and the world. Intelligence was faked, W.M.D.s were imagined, Iraq was laid waste, and American freedoms were trashed.

Olbermann turned to Bush’s golf remark, which he called the “final blow to our nation’s solar plexus.” He wrote:

Mr. Bush, I hate to break it to you six and a half years after you yoked this nation and your place in history to the wrong war, in the wrong place, against the wrong people, but the war in Iraq is not about you. . . . It is not, Mr. Bush, about your golf game! And, sir, if you have any hopes that next January 20th will not be celebrated as a day of soul-wrenching, heartfelt thanksgiving, because your faithless stewardship of this presidency will have finally come to a merciful end, this last piece of advice . . . when somebody asks you, sir, about your gallant, noble, self-abnegating sacrifice of your golf game so as to soothe the families of the war dead. This advice, Mr. Bush: Shut the hell up!

Olbermann finished the script shortly after 3 A.M. He e-mailed copies to his producers, and then he went to bed.

The jeremiad against Bush was a signature Olbermann effort, the sort of stylized, mocking tirade that has lately made him a cable-news sensation, the Edward R. Murrow of the Angry Left. Olbermann was pleased with the script, and the next day, before going on the air with it, he posted excerpts on the liberal blog Daily Kos, which is a fairly good representation of the Olbermann fan base. The Kossacks wholly approved. (“You excoriated the bloodyhanded, warmongering imbecile.” “This country cannot survive without you.” “Dude, you’ve got a pair of steel ones!” “I’m gonna print it out, hang it up and memorize it.”)

At MSNBC, the feedback was slightly more cautious.

– I Do? Just because same-sex couples can get married in California doesn’t mean they have to.

In the weeks since the California Supreme Court’s historic ruling legalizing same-sex marriage, gay men and lesbians have hugged, kissed, popped bottles of bubbly and danced in the streets.

Some have also looked themselves in the mirror and asked: “I do?”

Beneath the widespread community euphoria at having the right to marry lies some individual ambivalence about actually doing so.

Yes, there will be a rush of weddings beginning Tuesday, the day most counties will start issuing marriage licenses (a few are to begin Monday night). But there will also be questions, though not always voiced aloud:

“Up until now, we’ve never had to think about those questions,” said the Rev. Neil G. Thomas, senior pastor at Metropolitan Community Church Los Angeles, which was founded to minister to the gay community when many mainline churches wouldn’t.

“In a sense, it changes nothing,” said Jeffrey Chernin, a family therapist who works with both gay and straight couples.

“But in another sense, it changes everything.”

Some couples welcome the change. Ron Elecciri, 43, who works in television development, and his partner of 11 years, attorney Andy Birnbaum, 38, have been waiting for this ruling since the high court nullified their 2004 San Francisco marriage.

“Both Andy and I did not hesitate to say we’re going to be married again,” Elecciri said. “The only decision we’re not together on is whether we want a big wedding reception or not.”

Other couples face bigger divides. Marcy Israel, a San Luis Obispo wedding photographer, would like to marry her partner of 13 years now that she finally can. But she knows her partner is not as enthusiastic.

“We haven’t had a real in-depth discussion yet, but she questions the whole idea of marriage for anyone,” Israel said.

She said her partner “feels no need of outward reinforcement for what she feels.” Israel, on the other hand, is “more romantic and also more political. I feel that the more gay couples in committed relationships who take this step, the harder it will be to say sorry, you hundred thousand people, but you’re no longer married.”

In a larger sense, though, just having the choice to marry or not is a big step forward in equality.

Ten years ago John McCain had to apologize for regaling a Republican audience with a crude sexual joke about Hillary and Chelsea Clinton and Janet Reno. Last year he had to explain why he didn’t so much as flinch when a supporter asked him on camera, “How do we beat the bitch?” But these days Mr. McCain just loves the women.

In his televised address on Barack Obama’s victory night of June 3, he dismissed Mr. Obama in a single patronizing line but devoted four fulsome sentences to praising Mrs. Clinton for “inspiring millions of women.” The McCain Web site is showcasing a new blogger who crooned of the “genuine affection” for Mrs. Clinton “here at McCain HQ” after she lost. One of the few visible women in the McCain campaign hierarchy, Carly Fiorina, has declared herself “enormously proud” of Mrs. Clinton and is barnstorming to win over Democratic women to her guy’s cause.

How heartwarming. You’d never guess that Mr. McCain is a fierce foe of abortion rights or that he voted to terminate the federal family-planning program that provides breast-cancer screenings. You’d never know that his new campaign blogger, recruited from The Weekly Standard, had shown his genuine affection for Mrs. Clinton earlier this year by portraying her as a liar and whiner and by piling on with a locker-room jeer after she’d been called a monster. “Tell us something we don’t know,” he wrote.

But while the McCain campaign apparently believes that women are easy marks for its latent feminist cross-dressing, a reality check suggests that most women can instantly identify any man who’s hitting on them for selfish ends. New polls show Mr. Obama opening up a huge lead among female voters — beating Mr. McCain by 13 percentage points in the Gallup and Rasmussen polls and by 19 points in the latest Wall Street Journal-NBC News survey.

The fictional scenario of mobs of crazed women defecting to Mr. McCain is just one subplot of the master narrative that has consumed our politics for months. The larger plot has it that the Democratic Party is hopelessly divided, and that only a ticket containing Mrs. Clinton in either slot could retain the loyalty of white male bowlers and other constituencies who tended to prefer her to Mr. Obama in the primaries.

This is reality turned upside down. It’s the Democrats who are largely united and the Republicans who are at one another’s throats.

As a footnote to Mr. Rich’s last point, look at what happened yesterday in Toledo when the Lucas County Republicans elected a new chairman. They had to call the cops.

– The Tonys: Tonight is Broadway’s big night. I’m pulling for S. Epatha Merkerson for Best Lead Actress in a Play (Come Back, Little Sheba), but then I’m slightly biased…

– Doonesbury: The hiatus is over, and here are some previews of coming attractions.

– Opus: What kind of Democrat are you?