– Traffic in Miami: Simply put, it sucks out loud. And the mass transit system is worse off than it was after the 2002 vote to raise taxes to improve it. 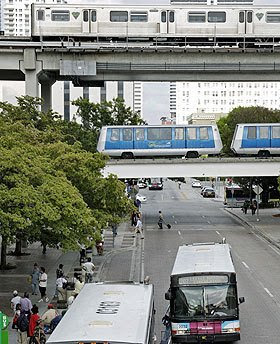 Documents and interviews with those who created the campaign for the 0.5 percent sales tax reveal that the effort was doomed from the beginning by parochial politics, power grabs, waste and mismanagement.

At the heart of the matter: The 2002 campaign avoided any mention of chronic financial problems that had plagued the transit agency, and it promised far more improvements than the tax could possibly deliver.

As a result, in one of the nation’s most traffic-choked communities, with soaring gasoline prices pushing more people toward mass transit, county commissioners are discussing steep fare hikes — and maybe doubling the transit tax — to try to rescue some of the promises of 2002.

“They promoted an illusion,” said Frank Del Vecchio, a retired lawyer and Miami Beach activist who opposed the tax in 2002. “It was a device for extracting additional tax revenue into the system that insiders realized was going bankrupt.”

So it’s not just my imagination that the train to nowhere, as they called Metrorail when it was built back in 1980’s, really is going nowhere. More’s the pity for someone whose commute just got almost three times longer.

– Graceful Exit: Hillary Clinton’s exit as seen by a variety of commenters, including readers at TPM and Andrew Sullivan: 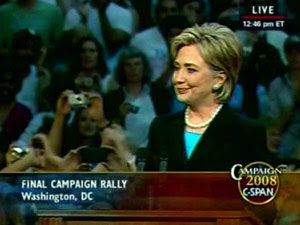 TPM Reader KW: For those who found Hillary’s concession speech to be too much about her I would only say it was about those of us who supported her candidacy. Her speech was inspiring and gracious and spoke to the millions of Democrats, Republicans and Indpendents [sic] who worked for her campaign and voted for her. If there are those Democrats who still feel it is necessary to denigrate Senator Clinton and her run for the Presidency, I would ask them to think about the change they advocate and the no more politics as usual. The only way to say no to the Washington politics of the past 20 years is to stop hating and start moving forward.

TPM Reader MS: For all the talk of whether Clinton’s concession speech was sufficient to bring her most ardent supporters into the Obama fold, I think the speech accomplished something else, at least for me, a strong Obama supporter: it softened my opinion of Clinton at a time when I had become absolutely fed up with her escalating nonsense over the last few weeks. While I still don’t think an Obama/Clinton ticket is ideal for purely political reasons (there are better possibilities), I now would not be as opposed to such a ticket on a purely visceral, personal level. I couldn’t have said that yesterday. If one of Clinton’s goals today was to begin repairing the division between herself and those voters who didn’t support her, I believe she succeeded.

TPM Reader VM: I’m from Illinois, so I was an early and enthusiastic Obama supporter. Throughout the campaign, I kept trying hard to take the high road, insisting that I would support Hillary if she were the nominee. At times in this highly competitive campaign, it was hard. Very hard.

The speech would ring hollow if she did not refer to the historic nature of her candidacy, and to its successes. As an Obama supporter, I’m fine with her taking a victory lap; she deserves it.

I hope that other Obama supporters acknowledge our friends who supported Clinton. Clinton ran a great campaign, and it was historic. Our friends should be congratulated.

Andrew Sullivan: Senator Clinton did all she needed to do: thanked everyone and unequivocally endorsed and supported Barack Obama. One theme stuck out to me: she essentially said that even though she was careful to avoid ever saying that she was running because she was a woman and that people should vote for her because she is a woman, that’s what she believes in private. That’s the theme she spoke of most compellingly. She is Ellen Malcolm’s spiritual sister. In the end, Clinton remains wedded to the identity politics of her generation and her time. It’s a powerful message after so many long decades and centuries in which women have been denied full equality in law and society. It’s a necessary message and a moral message. But it becomes circular and self-defeating when it becomes its own rationale.

I think history will show that she didn’t quite have the talent to do it on her own steam, but that she made it much easier for another woman to become president one day. Her two biggest problems: She first married a man who was her political superior and was then defeated by one. She is a very talented politician but it was her fate to find her career hemmed in by two even more talented ones: Bill and Barack. She made up for it all with enormous hard work, diligence and ruthlessness. At any other moment, she would have won. But this is history and politics at the highest level. You cannot defeat such a moment if you are a Salieri. And she had to deal with two Mozarts.

Mr. McCain’s speech in a New Orleans suburb on Tuesday night spawned a cottage industry of ridicule, even among Republicans. The halting delivery, sickly green backdrop and spastic, inappropriate smiles, presumably mandated by some consultant hoping to mask his anger, left the impression that Mr. McCain isn’t yet ready for prime-time radio.

But the substance was even worse than the theatrics. Incredibly, Mr. McCain attacked Mr. Obama for being insufficiently bipartisan while speaking to the most conspicuously partisan audience you can assemble in today’s America: a small, nearly all-white crowd that seconded his attack lines with boorish choruses of boos. On TV, the audience came across as a country-club membership riled by a change in the Sunday brunch menu.

Equally curious was Mr. McCain’s decision to stage this event in Louisiana, a state that is truly safe for the G.O.P. and that he’d last visited less than six weeks earlier. Perhaps he did so because Louisiana’s governor, the 36-year-old Indian-American Bobby Jindal, is the only highly placed nonwhite Republican he could find to lend his campaign an ersatz dash of diversity and youth.

Or perhaps he thought that if he once more returned to the scene of President Bush’s Katrina crime to (belatedly) slam that federal failure, it would fool voters into forgetting his cheerleading for Mr. Bush’s Iraq obsession and economic policies. This time it proved a levee too far. The day after his speech Mr. McCain was caught on the stump misstating and exaggerating his own do-little record after Katrina. Soon the Internet was alight with documentation of what he actually did on the day the hurricane hit land: a let-us-eat-cake photo op with Mr. Bush celebrating his birthday in Arizona.

Anything can happen in politics, and there are five months to go. But Tuesday night’s McCain pratfall — three weeks in the planning by his campaign, according to Fox News — should be a clear indication that Mr. Obama must accept Mr. McCain’s invitation to weekly debates at once. Tomorrow if possible, and, yes, bring on the green!

– Doonesbury Classic (that means it’s a re-run while Garry Trudeau is still on a break): Tune that name.

– Sports: Big Brown doesn’t do it, but the Tigers beat Cleveland.