Forty years ago today — June 5, 1968 — I woke up early in my dorm room in Auchincloss Hall at St. George’s School in Newport, Rhode Island. It was the last week of my freshman — and only — year at the school, and we were in the middle of final exams. I had gone to sleep the night before, after cramming for my Old Testament exam, listening to WBZ Radio out of Boston which had been reporting the early results of that day’s primary election in California. Bobby Kennedy was favored to win, but the final results hadn’t come in by the time I had to obey the prefect’s order for Lights Out and turn off the radio.

I was only fifteen but I was already getting interested in politics, especially since President Johnson had announced in March that he would not seek and would not accept the nomination of his party for another term as president. Eugene McCarthy, the anti-Vietnam War candidate, had showed surprising strength in the New Hampshire primary, and with the entrance of Bobby Kennedy into the race in March, it looked like the Democrats were poised to take the party in a whole new direction and put forward a charismatic and dynamic candidate who could beat the Republicans, even if they nominated that old war horse, Richard Nixon. 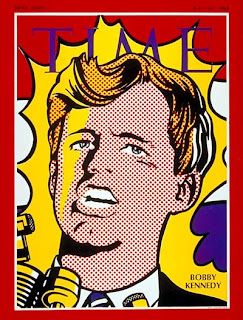 Bobby Kennedy was drawing huge crowds everywhere he went; crowds of all ages, including high school and college kids who were still too young to vote (the voting age wasn’t lowered to 18 until 1971). And I was caught up in it; I read everything I could about him, including the cover story entitled “The Politics of Restoration” in the May 24, 1968 edition of Time, and I put the cover of that issue on my wall like it was a rock concert poster. I saw in Bobby the continuation of the hope and optimism that I remembered from his older brother Jack, the first president I remembered not as some vague and distant old man, but as a person and someone I cared about. I looked forward to Bobby Kennedy sweeping into Chicago in August and capturing the nomination, picking up the torch, and sprinting to victory in November against the dour and scary Republicans. Camelot was going to make a comeback, and the White House would be crawling with Kennedy children once again.

And then I turned on the radio.

At first I wasn’t sure what I was hearing. Instead of the normal news, weather and sports from Boston, I tuned in to hear the morning news announcer stumbling through a wire service report that “the doctors would be holding a press conference on Senator Kennedy’s condition in a few moments,” and then he said, “To recap, Senator Robert Kennedy was shot last night in Los Angeles after winning the California primary against Minnesota Senator Eugene McCarthy. He’s in critical condition at Good Samaritan Hospital….” I listened for a few more minutes, then knocked on the door of the kid next door, a guy named Jeff. He was still asleep — it was a little before seven and we didn’t have to be to our final until 8:30 — but soon the entire floor was buzzing with the news. When we gathered in the cavernous second-floor study hall to sit for our exam, the chaplain led us in prayer for Bobby, and then we methodically took the exam. Afterwards, we waited for any news, but we all had the sick feeling that we knew what was coming. We had heard it before with John F. Kennedy less than four years before and with Martin Luther King in April.

Three days later, June 8, 1968, was graduation day — they call it Prize Day at St. George’s. That was also the day of Bobby Kennedy’s funeral at St. Patrick’s Cathedral in New York, but I missed it on TV since I was sitting in the stuffy gym watching the senior class pick up their diplomas. After lunch I got on a charter bus to Boston to catch a plane back to Toledo, knowing I would not be returning to St. George’s in the fall, and arriving at home in the dusk of a June night in time to see once again the grainy black-and-white images of yet another Kennedy funeral procession up the hill of Arlington National Cemetery. Night had fallen — the funeral train trip from New York had taken longer than expected — and the procession, including the teenage sons of Bobby and Ethel bearing their father’s coffin, made its way to the grave site under the glare of floodlights. He was buried under a simple white cross near the eternal flame of his brother.

That was the summer that cities burned, the police rioted at the convention in Chicago, the Russians invaded Czechoslovakia, and Hubert Humphrey and Edmund Muskie began their campaign to keep the White House in the hands of the Democrats while trying desperately to distance themselves from the Johnson administration; not an easy task since Humphrey was LBJ’s vice president. The Republicans nominated Richard Nixon and Spiro Agnew in Miami, and George Wallace, the governor of Alabama who stood in school house door and swore to uphold segregation now and forever, launched a third-party run to draw off disaffected conservative blue-collar Democrats, a lesson not lost on Richard Nixon and the GOP when Wallace carried five southern states with ten million votes. I volunteered for the local Democratic campaign office and spent many weekends after I got my driver’s license in September handing out literature to inner city neighborhoods in Toledo. Vote Humphrey-Muskie said the little red, white, and blue stickers, and I tried hard to be as enthusiastic as possible, but I sorely wished they said Vote Kennedy.

We watched the election returns in November, the race too close to call until the next morning. My history teacher wheeled in the big TV on the VTR cart and we watched Walter Cronkite pronounce Richard Nixon as the next President of the United States. Vice President Humphrey conceded gracefully, and I spent the evening scraping the last of the Humphrey-Muskie stickers off the bumper of my mom’s 1967 Ford Country Squire.

It’s been forty years since I felt the same way about a presidential candidate as I did about Bobby Kennedy. Perhaps, like your first love, you can never recapture the intensity, the newness, the thrill of hearing someone express the feelings you feel and you experience a passion that goes beyond yourself; you start to see the world in the third person, and you take it so personally that it becomes a part of you. And when the shock of the loss hits you, it numbs you. The grieving process is excruciating, and you feel as if nothing could ever be the same again. And the next time you know that no matter what the next person says, be they a candidate for president or a lover, you will never forget the first one and you will subconsciously compare them, and the new one will be found lacking. It’s not their fault that I can’t fall for them the same way I fell for the first one. In a way, I wish I could. I admire the passion of the people I see taking up the cause of their candidate, no matter their party, and I am envious of their devotion to the cause. I hope they never lose it, but I also hope they realize that sometimes it can be taken away with a terrible force and brutal reality that leaves a scar that is never truly healed.

In one small way, the spirit and youthful passion of my admiration and support of Bobby Kennedy has never left me. When I first envisioned the character of Bobby Cramer in 1994, I knew where his name came from; he was born in 1961 and his mother adored Bobby Kennedy. I think the same sense of hope that I saw in Bobby Kennedy comes through in the boy in the novel and the play, even if he does believe that hope is his greatest weakness. But I wish that I — and the country — can find that hope again; that we all find that same sense of wonder and purpose to do what we can to make this country and world a better place that I had on that June morning forty years ago, the moment before I turned on the radio. 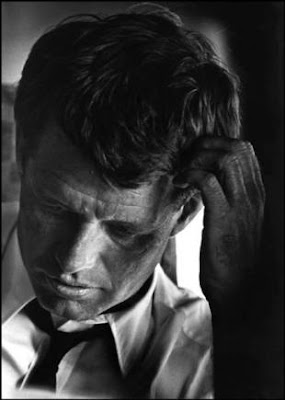