Have you been getting those anti-Obama e-mails from your crazy right-wing relative who is sure that Michelle Obama is a reincarnation of the black militant along the lines of Angela Davis and that Barack Obama is really a Muslim who will be sworn in on the Quran? Mike Madden at Salon.com takes them on and debunks two of them. 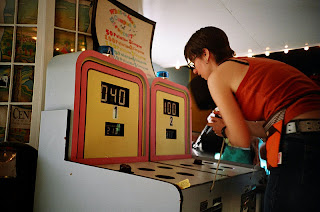 For months, anonymous e-mail chain letters, blog posts and message board items attacking Barack Obama have been flying around the country. Obama’s campaign is concerned enough about the rumor mill to devote an entire Web site to fighting them. While some of the messages are blatantly false, the most dangerous ones mix lies and out-of-context facts just well enough to sound legit, playing not too subtly on racism and ignorance to make the truths they include sound sinister. (Now a book that basically collects some of the bogus accusations by Jerome Corsi is sitting at the top of the New York Times bestseller list.)

Two such messages, circulating by e-mail and popping up in comments on blogs for months, are reproduced below — and annotated and debunked, point by point — to illustrate the tactics Obama’s been up against for most of the campaign. The first e-mail attacks the candidate’s wife, attempting to paint Michelle Obama –- and by extension, Barack Obama — as an America-hating black separatist radical. Democratic pollsters say many voters don’t know much about Michelle Obama. This e-mail, which began circulating during the Democratic primaries, seems to be a deliberate attempt to fill in a mostly blank mental canvas with negative associations before the Obama campaign can tell her story itself.

A second, more recent e-mail, received just a few days ago, shows that the spurious but very durable belief that Obama is a Muslim continues to ricochet around the Internet. Follow along (any typos and punctuation errors are in the original e-mails) as we deconstruct two anti-Obama e-mails.

Good luck, Mike; you’ve taken on a full-time job of playing Whack-A-Mole with these pernicious e-mails; they never die. I’m still getting the ones that say that Hillary Clinton is a lesbian who conspired with Vince Foster to hide the fact that she was the second gunman on the grassy knoll in Dallas in November 1963.

My standard response to anyone who sends me these e-mails is basically, “Gee, I didn’t know you were that stupid to fall for this shit. I thought you were smarter than that.”