The Republicans are mocking the stage set from which Barack Obama will deliver his acceptance speech at Invesco Field at Mile High tomorrow night:

Obama’s “temple”
Of course, it doesn’t look as fancy as the one the Republicans built for George W. Bush in New York in 2004: 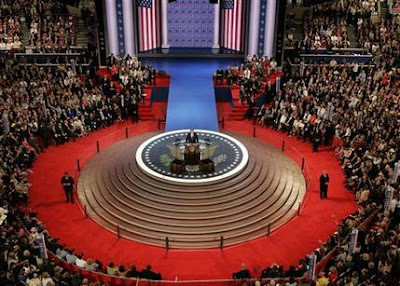 Bush’s “temple”
I like the added touch of the stanchions and ropes; makes it look all holy and stuff. And isn’t that red carpet luxurious? To quote Mrs. Doubtfire, it just reeks of taste.